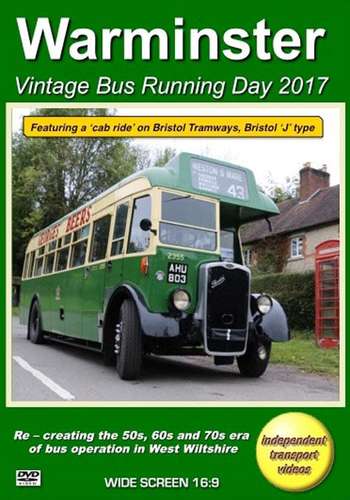 The popular Warminster Bus Running Day, after an absence of a few years, returned for 2017. This year the event took place on Sunday 1st October and the independent transport videos cameras were invited back to record the action for you to enjoy.

This superb event sets out to re-create the 50s, 60s and 70s era of bus operation in West Wiltshire and this year gave more of the same excellent action. The area has been traditionally the home of the Bristol/ECW marque of which a large number of the type are seen in this programme. These included Bristol J and L types, as well as LS, SC, SU, MW, LH and REs with double-decker Bristols featuring the LD, FLF and a number of VRTs. Other vehicle types are represented by the Bedford OB, Leyland Titan, Tiger Cub, Panther Cub, National, Atlantean and Olympian. Also an AEC Regal and Routemaster. As a result a vast array of vehicles feature in this programme.

Our filming begins at the very start of the day in the Bus Station as the vehicles start to arrive. The control bus this year is a Volvo B7RLE with a Wrightbus Eclipse Urban body supplied by First Mendip in the retro Badgerline livery. Further arrivals are also seen making their way to the Bus Station along Station Road. Now it is time of a special treat! We jump into the cab of 2355 (AHU 803) a 1934 Bristol J type with a 1947 BBW B35R body formally owned by Bristol Tramways, for the service to Horningsham via Crockerton. Here we see the driver hard at work and get the idea of what it was like driving a country bus service in the 1950s. At Horningsham we meet up with a former Hants & Dorset Bristol L type and Bristol Omnibus Bristol RESL. We return to Warminster Bus Station as a passenger to complete the experience. For our second ride out our cameras join former Barton Transport 467 (JNN 384) a Leyland Titan PD1 with a superb semi-coach Duple L55F bodywork dating from 1947. We enjoy the ride to Westbury railway station and back to Warminster. Our filming continues along Station Road, High Street, and Market Place and concludes at the Bus Station. As usual we would like to thank Bob Eade, Dave Andrew and “H&DW&D” for organising this excellent event.