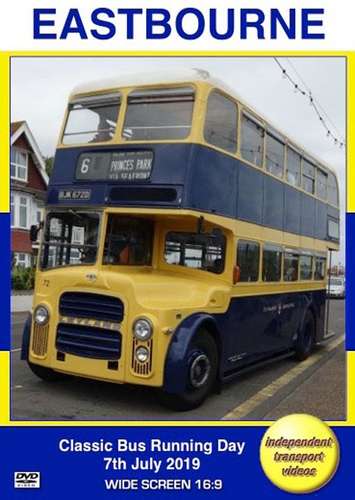 This is the second visit by the independent transport videos cameras to this most enjoyable running day organised by a group known as ‘Eastbourne Classic Bus’. The event took place on Sunday 7th July 2019 and was centred on the town’s Victorian railway station. A total of ten routes were operated with an interesting mix of preserved buses and coaches, many from the Eastbourne area. There were three former Eastbourne Corporation vehicles, namely 42 (AHC 442), the 1951 Bruce-bodied AEC Regent III, 72 (BJK 672D), a 1966 Leyland Titan PD2A with East Lancs bodywork and 84 (DHC 784E), a similar Leyland Titan PD2A but with its East Lancs body converted to open-top. Other operators represented were Southdown, Brighton Hove & District, Maidstone & District, East Kent, London Transport, Metrobus and even an open-top AEC Regent V with a Metro-Cammell body from Devon General.

Our filming takes place at the hub of the action at the railway station and on Terminus Road, where we see the vehicles going about their duties with healthy loads of happy passengers. Our cameras take a ride on 42 (AHC 442) on service 8 from Eastbourne Station to Hampden Park and back to the Station. We can hear the tuneful engine notes as the bus re-creates a service it would have run when operating in its heyday. Our second ride is a real treat. We put a camera into the cab of 72 (BJK 672D) for a spectacular journey on a complete ‘rounder’ of service 6. We also have a camera on the upper deck to get the passengers experience of the journey. The route takes us from the station to the Foot of Beachy Head, along the seafront, past the pier to Princes Park. The return journey takes the same route back to the station. It is a joy to watch our driver battle with the traffic, a crash gearbox and the twists and turns of this picturesque route. We hear the sounds of the engine first hand just as the driver does, and did in years gone by. Our final scenes are filmed along the seafront adjacent to the pier and the lovely ‘floral carpet’ that has adorned Eastbourne seafront for many years. To complete our nostalgic journey we have some cine film for you to enjoy. Taken by Malcolm King in the 1970s we see Leyland Panthers, Titans and Atlanteans in service along with AEC Regents – pure nostalgia. We hope you enjoy our programme!