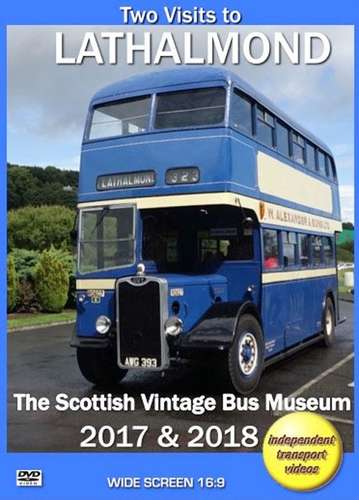 The independent transport videos cameras are no strangers to the excellent Scottish Vintage Bus Museum situated at Lathalmond in the Kingdom of Fife, Scotland. On this DVD we present two visits, the first at the annual Open Weekend on the 19th & 20th August 2017 and at their Open Day event that took place on the 20th May 2018.

Beginning at the 2017 event we see both the Museum’s vehicles and visiting buses and coaches in operation around the large interesting Museum site. We also take two trips to nearby Dunfermline and film the bus action in the busy bus station, which features mostly Stagecoach buses on local services and the large impressive three-axle coaches operating the interurban and express services. As we have seen in past programmes featuring Lathalmond, there are a rich variety of buses at these events. Vehicle types include, Bristol, Leyland, Guy, Volvo, Bedford, Seddon, AEC, Daimler, Albion and more! There are a huge variety of liveries, both past and present to be seen - too many to mention here, you will have to watch the programme for yourself to see! We take a short ride on a brand new Volvo B5TL with a Wright Eclipse double-deck body belonging to Lothian Buses on the ‘internal service’. A further short ride is taken on a former KMB (Hong Kong) Leyland Olympian, now operated by Swift Coaches of Barrhead having just been acquired from the Brightbus business of North Anston. The Alexander-Dennis factory at nearby Falkirk displayed a new Enviro500 double-decker that was bound for Mexico City adding to the international exhibits! There is plenty of action for you to see and enjoy.

The same can be said for our visit to the Open Day in May 2018. A smaller event, but with just as much action taking place at the Museum site, which we capture on film for you. Also on this visit our cameras take three rides. The first is onboard a 1947 Albion Venturer double-decker that operated with Sydney Buses in Australia. We travel on this interesting bus to the bus station at Dunfermline. We travel back to Lathalmond on our second ride, a former Strathclyde PTE Volvo-Ailsa B55 with an Alexander double-deck body providing some interesting sounds! The third ride is on an AEC Reliance with a Plaxton B47F bus body to the village of Saline. This bus was previously operated by Burnett Motors of Mintlaw. Lothian Buses also supplied some of their latest vehicles to the event as well as the recently converted back from open-top, AEC Routemaster RM281 (VLT 281).  This bus looking splendid in its extended ‘ERM closed-top’ format. There is plenty of action for you to enjoy. A visit to Lathalmond is recommended, as you will probably agree once you have watched this programme.