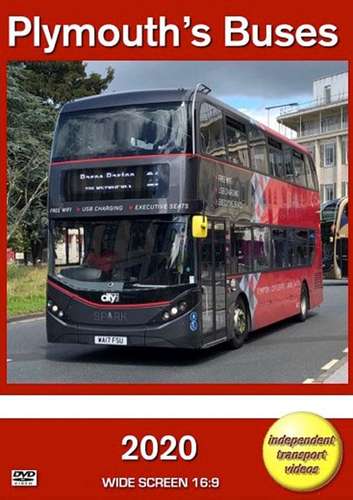 Plymouth, Devon’s largest city is situated in England’s south west. It borders on Cornwall with the River Tamar separating the two counties. There has always been a lot of interest for the bus enthusiast over the years. From the days of Western National and Plymouth City Transport through to the twenty-first century’s Firstbus, Stagecoach and Go-Ahead. A lot has changed since our last DVD programme filmed in 2015 that witnessed the end of Firstbus in the city. In 2020 the major players are Go-Ahead – branded as ‘Plymouth Citybus’ and ‘Go Cornwall Bus’ and Stagecoach. In March 2020 Go-Ahead won an eight-year contract to run all of Cornwall Council’s supported routes. Over 100 new buses were ordered to operate these services, the vehicles being mostly Alexander Dennis Enviro200MMC single-deckers. However, due to the ongoing coronavirus pandemic not all the buses could be delivered so ‘Plymouth Citybus’ had to supply buses from Plymouth to operate some of these new services in Cornwall. This meant that buses had to be hired from other Go-Ahead companies to operate the city services. Therefore this programme also features buses from Brighton & Hove, Bluestar (Southampton), more bus (Bournemouth) and Go North East (Newcastle-upon-Tyne area).

The independent transport videos cameras paid two visits to Plymouth in 2020, the first in July, the second in September to catch all of the action for you to enjoy. Filming locations include Exeter Street, St Andrews Cross, Royal Parade, Derrys Cross, Charles Cross and Hoe Road. During our July visit we took a ride on 504 (WF63 LZD), a ‘Plymouth Citybus’ ADL Enviro400 on route 70B to Torpoint that included travelling on the Devonport to Torpoint ferry. This is a ‘Transport for Cornwall’ service and the buses normally carry a ‘Go Cornwall Bus’ fleet name, but our bus was in an overall advertisement livery for the Royal Navy and Royal Marines Charity. On the Cornish side of the River Tamar at Torpoint we film the buses on, and leaving the ferry. Our return to the city centre is onboard, temporary fleet number 1203, which is 687 (YN57 FYG), a Scania N230UD with East Lancs Omnidekka bodywork from the Brighton & Hove fleet on route 34 - a ‘Plymouth Citybus’ service. Stagecoach show off their new local and interurban liveries and as you will see there is a great amount of interest for the bus enthusiast in Plymouth.

In addition we also include some archive footage of Plymouth buses in 2006. This includes film at the Bretonside bus station and the Torpoint Ferry. You may like to watch the companion DVD to this programme entitled ‘Buses in Cornwall 2020’ and see the Plymouth buses operating far down in Cornwall with a lot more besides…