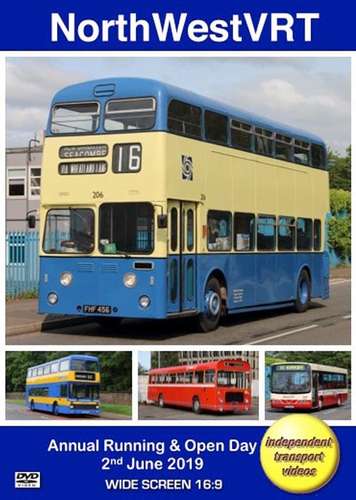 With the great success of our previous DVD programmes filmed at this excellent event, our cameras have returned to record the event again in 2019. The Annual Running & Open Day is organised by the North West Vehicle Restoration Trust. As usual this event is centred on the Trust’s premises on the Kirkby Industrial Estate near Liverpool, Merseyside.

As always we start our filming early in the morning as the vehicles are positioned and the visiting vehicles arrive for the day’s action. There is always a large variety of buses and coaches for you to see and enjoy. This year is no exception - companies represented include local independents, GMT, Crosville, PMT, Midland Red, MPTE, Merseybus, Liverpool Corporation, Wallasey Corporation, St Helens Corporation, Widnes and Warrington Corporations as well as Ribble, Arriva, Stagecoach and many, many more! Our first bus ride of the day is in the cab of the superbly restored Fareway of Kirkby Leyland Olympian 165 (F456 BKF). This 85-seat Olympian has a Northern Counties body and looks very smart in its blue and yellow livery. This former local operator was Merseyside's first substantial newcomer in the post-deregulation era. We travel to Prescot railway station, returning to Charleywood Road via Hornhouse Lane in Kirkby where the Fareway garage was situated before the company was taken over by MTL Holdings in early 1993. More action is filmed along Charleywood Road where the Trust’s premises are situated.

As is usual at this event, the “Big Launch 2019” took place at 12.30. This year we had the pleasure of seeing three projects being launched to an eager waiting public! First out of the depot was 6538 (M538 WHF), a Volvo B10B-58 with a Wright B53F body, which is restored in its MTL Merseybus livery branded for Route 86. Next out was former Wallasey Corporation 6, now 206 (FHF 456) a 1959 Leyland Atlantean PDR1/1 with a Metro-Cammell H77F body finished in the Wirral version of the Merseyside PTE livery of blue and cream. Last, but not least at the ‘Big Launch 2019’ is former Ribble Motor Services 249 (HRN 249G), a Bristol RELL6G with an ECW B41D body. Restored to the National Bus Company livery of poppy red with a white band, this bus celebrating 50 years since the formation of the NBC and of course 2019 celebrates 100 years of the formation of Ribble Motor Services. Our cameras take a ride on the Ribble RE around the industrial estate and then a ride on the Atlantean to Kirkby railway station and back. Further rides are taken on the beautifully restored Ribble ‘White Lady’ Atlantean 1274 (RRN 423), with a Weymann CH59FT body and SNL816 (WFM 816L) a former Crosville Leyland National. Filming is concluded with action on Gores Road, Lees Road and Acornfield Road as the visiting buses leave for home. We would like to thank the NWVRT for organising this excellent event and we hope you enjoy watching our film.