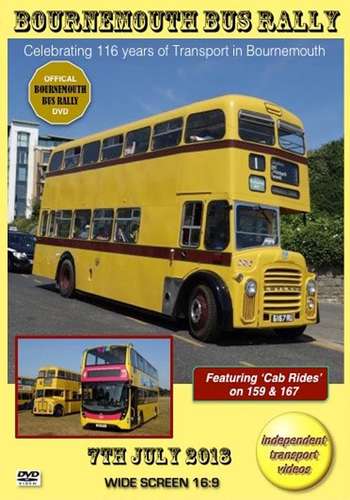 Welcome to our DVD programme of the second Bournemouth Bus Rally. independent transport videos were proud to be asked back by the organising team to produce this official DVD of this superb event that took place in King’s Park, Bournemouth on Saturday 7th July 2018. As a supporter of the event, our cameras were on site very early in the morning to record the arrival of the buses and coaches as they took up their positions on the rally field. The event was keenly supported by the two main local bus operators, RATP Dev – Yellow Buses and Go-Ahead South Coast. This year the celebration was for 116 years of public transport in Bournemouth.

Like last year, Yellow Buses sent a number of their current fleet of buses that formed part of the display. These included 31 (YX61 EMV) an Enviro 200 recently acquired from Tower Transit in London, 201 (SN17 MTU) an ADL 400MMC, one of the latest double-deckers, 433 (T204 XBV) an open-top Volvo Plaxton President and 592 (SJ56 GCF) a TransBus E300 which has recently joined the training bus fleet. No Bournemouth rally would be complete without a good selection of preserved Bournemouth buses! This year we had the pleasure of Leyland Tiger Cub PSUC1 – 266 (RRU 903), Leyland PD2 - 247 (KEL 133), Leyland PD3 – 159 (8159 EL), Leyland PD3A - 167 (6167 RU) and Dennis Dominator 262 (H262 MFX). You will also see a good selection of preserved buses from the local fleets of Damory and Wilts & Dorset and many more. Go South Coast is the other main bus operator in the Bournemouth area. They sent along one of their latest ‘morebus’ Enviro 200MMC single-deckers, 230 (HF67 EUN), one of 41 such vehicles operating the company’s m1 and m2 services and from their Swindon Buses region, a similar Enviro 200MMC, 2776 (HF67 ATX) in their smart new livery.

We also take two Bournemouth Corporation ‘Cab Rides’ out along the streets of Bournemouth to Boscombe Pier and back to the rally field. Our first is onboard 159 (8159 EL), a 1960 Leyland Titan PD3/1 with a Weymann H62D body. We get the drivers eye view as our camera is mounted in the cab taking in the sights and sounds for you to enjoy. Our second ‘Cab Ride’ is onboard 167 (6167 RU), a 1963 Leyland PD3A/1 with a Weymann H68F body, where you will enjoy a similar experience. Two further rides are onboard Bournemouth Corporation Leyland PD2, 247 (KEL 133) and the new ‘morebus’ Enviro 200MMC, 230 (HF67 EUN), showing just how bus travel has changed for both the driver and passenger over the past 60+ years! Our cameras capture a number of the buses running in service and manoeuvring around the rally field for you to get an excellent feel of this super event. As a bonus our cameras were invited along the following day for a drive around Bournemouth with preserved Leyland Tiger Cub, 266 and Leyland PD3A, 167, before they left Bournemouth for their respective homes. A big thank you to all concerned for organising the Bournemouth Bus Rally 2018. Enjoy our record of the day!