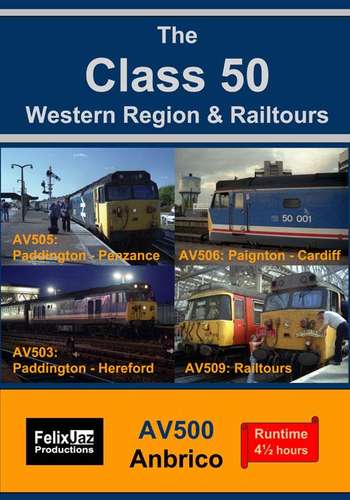 Section 4: Paddington (High Wycombe)
Banbury At Paddington we see 50040, 041, 036 and 046. We then join 036 for Banbury passing through South and West Ruislip, Gerrards Cross before stopping at High Wycombe. Another stop at Bicester North for single line, then arrive Banbury.

Section 6: Oxford - Hereford
We now join 50030 on a Paddington – Hereford service. At Evesham we await a 150 off the single line. Next a stop at Worcester Shrub Hill before continuing to Foregate Street.  By the time Hereford is reached it is dark.

Section 5: Par - Newquay
At Par we join 50041 on 11:10 Paddington – Newquay. A 142 comes off the single line at St Blazey. Goonbarrow sidings are almost empty as we pass with Quintrel Downs next. 005 runs round at Newquay and 027 also awaits departure.

Section 6: Par - Penzance
We now return to Par and 50010 departs. At St Austell 012 arrives and 031 departs. 031 arrives Truro after signal check. At Redruth 028 stops on a Penzance – Paddington service. Penzance sees 012 in the station. 018 is in the dock and 028 is picking up a Motorail carriage for Paddington service.

Section 1: Paignton Branch
At Newton Abbot we join 50035 on Brighton – Paignton. At Paignton 035 comes off. 50009 stands after service from Plymouth. 50012 (002) stands at Kingswear. 035 attaches to Exeter service. 009 awaits departure. 005 stops at Torquay. At Newton Abbot 009 arrives from Plymouth and runs around and departs for Waterloo.

Section 2: Newton Abbot - Dawlish
50001 arrives Newton Abbot on the Cardiff Central service. At Dawlish 007/050 pass on an Aylesbury – Plymouth tour. Up vans pass before 001 arrives. 003 then departs on the Plymouth – Glasgow/Aberdeen service.

Section 3: Dawlish Warren – Exeter St Davids
50050/033 approach Dawlish Warren with a Plymouth – Meldon Quarry tour. 025 arrives on Paignton - Waterloo then 001 departs. At Exeter 001 arrives then 017 attaches to a late-running sleeper service. 007/050 depart on ECS after Waterloo – Exeter then return for the next Waterloo service!

Section 4: Exeter St Davids – Bristol Temple Meads
50031 and 024 both pass stock in Riverside. At Cowley Bridge 003 passes twice on the SEG Waterloo – Meldon Quarry tour. 001 stops at both Taunton and Weston-super-Mare. 050 arrives Bristol. Overnight views show 027 and another departing along with 005 standing.

Section 2: Salford – Glasgow Central
After departing the temporary Salford station we use the newly opened Windsor link and pass a new Salford Crescent. At Carlisle there is a chance for photographs. Glasgow Central is reached and headboards are removed from 50009.

Section 3: Glasgow Central - Barrhead
After a few hours in Glasgow we rejoin 50036/009 for 17:02 return working. We are signal checked in the Muirhouse area and see a couple of 303 units heading towards the city. After the short delay we make good time towards Barrhead.

Section 4: Barrhead – Manchester Victoria
After a good photo stop we depart Barrhead. Gretna Junction is passed before arrival at Carlisle. After passing Blea Moor signal box we cross Ribblehead viaduct. Manchester Victoria arrival is in the dark and we leave the tour.