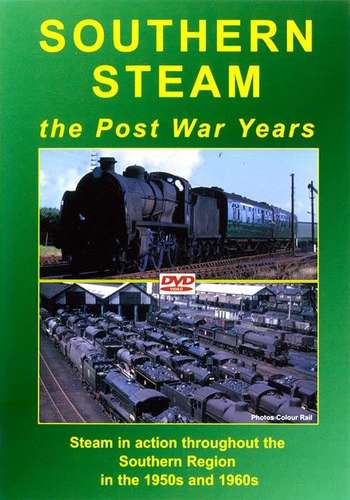 Steam in action throughout the Southern Region in the 1950s and 1960s, including:

1950s Southern: 'King Arthurs', 'Lord Nelsons', 'Bulleid Pacifics', 'Schools', a G6 0-6-0 tank and Standard designs at Victoria and on the main line to Basingstoke and Southampton.

Eastleigh in the 1950s: Featuring the Works and Steam Shed including the Open Day of August 1957. Includes some veteran motive power of the period including a T9, B4 tanks and a Brighton Atlantic.

Southern Steam off the Beaten Track in the 1950s: Including the Seaton and Lyme Regis branches and the West Country with Beattie Well Tanks.

Reading Southern: A detailed portrait of the station, steam shed and its approach lines in the years leading to closure in 1965. Includes passenger and freight and a wide variety of motive power.

Specials in the 1950s: The Rother Valley Limited of October 1958 featuring Terriers to Tenterden, the Southern Counties Limited in February 1957 with Brighton Atlantic 'Beachy Head' plus the Atlantics last run in service and a tour of Brighton Shed in 1958.

The Last Steam Worked Main Line: Steam on the route from Waterloo to Basingstoke in 1964.