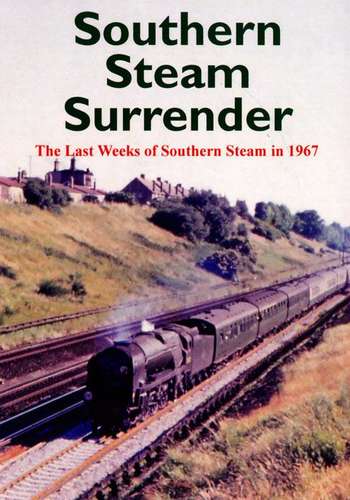 Full archive film containing the last weeks and months of 1966/67 leading up to the end of steam traction on the Southern Region in the July of 1967.

We talk to drivers and fireman who operated the very last services in 1967, including Jim Evans, Geoff Burch and Alan Newman.

Extensive films all the way from London to Weymouth stopping off to see operations at Woking, Basingstoke, Winchester, Eastleigh, Southampton, Brockenhurst, Bouremouth, Poole and Weymouth.

The Lymington and Swanage branches are covered with many views at Wareham too. More films from Basingstoke to Salisbury, the other location to lose steam that year. We see many train services at Salisbury and see the MPD towards the end in 1967.

A special feature on the Bournemouth Belle in its last days with footage from Waterloo all the way down to Bournemouth. Some of the last specials to commemorate the final weeks including the USA tanks to Fawley and trains in 1966 that passed through Westbury.

Electrification works are seen and trial services using the TC sets with class 3 diesels and the first Class 4 diesel workings which were to take over some services, including the ‘Belle’.