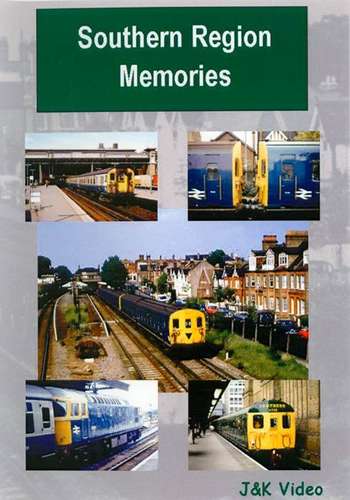 This programme evokes memories of British Rail Southern Region in the 1970s and 1980s, prior to the creation of Network SouthEast.

The opening scenes near Wimbledon, capture the change from green to blue livery, when some of the old Southern Railway stock was still in service.

The ubiquitous slam-door suburban 4 sub and 4 EPB EMUs feature prominently, along with the 2 HAPs at such locations as Victoria, Clapham Junction, Vauxhall, Waterloo and London Bridge, as well as further onto the London suburbs.

Victoria, Cannon Street and Charing Cross stations are seen as they appeared before they were rafted over for property development.

There is also a brief look at the former Holborn Viaduct terminus.

This programme also shows scenes of the narrow profile Hastings diesels and the Class 73 electro diesels.

Outer suburban rolling stock is also covered, including scenes at Bournemouth, before the line to Weymouth was electrified, when Class 33 diesel locos took over for the last part of the journey.

Push-pull operation to Olympia with Class 33 locomotives is covered, as well as glimpses of Dover Marine and the Folkstone Harbour Branch.

Finally, the green preserved 4 Sub and 2Bil units are seen in operation during the Cannon Street open day in 1986.