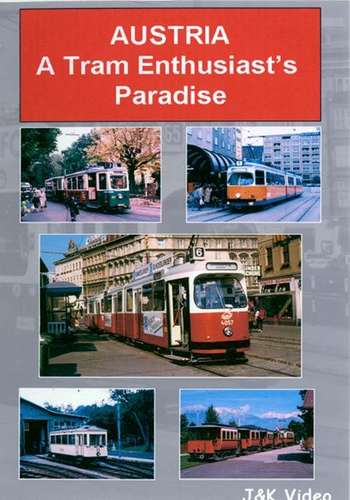 This DVD covers the present tramway scene in Austria, together with historical sound film dating back as far as 1974, when many 2-axle trams with trailers operated on each of the systems.

Today, Austria has five urban tramways, and a number of electric Light Railways, some of which are operated by trams.

The capital, Vienna, has the largest tramway system in Western Europe, with around 950 trams operating on 32 routes, as well as the Stadtbahn, U-Bahn, and Wiener Lokalbahn interurban to Baden.

A visit to the Vienna Tram Museum is included, and we take a ride on one of the many tram sets in its collection.

The country's smallest tramway is at Gmunden, and connects the lakeside resort with the OBB railway station at the top of a steep hill.

From here, brief visits are made to the Stern & Hafferl lines in upper Austria, including Gmunden - Vorchdorf, Vorchdorf - Lambach, Lambach - Haag, and the Attersee line.

A visit is also made to the Saint Florian museum line.

Next we take a run on the Salzburger Lokalbahn, including a ride on a restored set dating from the early part of the 20th century.

The scenic town of Innsbruck has both urban and interurban lines to offer, and this DVD includes the parade of historic cars for the centenary in 1991.

Using archive soundfilm, we see the last days of AC operation on the Stubaitalbahn, with the distinctive sounds echoing around the mountains.

Finally we visit the busy six-route system in Graz, including some scenes of its excellent tramway museum.