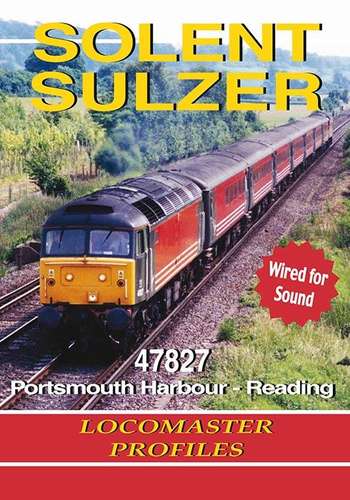 The Portsmouth Direct Line between Havant and Guildford has seen little in the way of locomotives since it was electrified in 1937.

Thus, for many years this scenic and steeply-graded route attracted little attention until Virgin CrossCountry introduced Class 47s onto its 14.35 Portsmouth Harbour to Blackpool North service in the summer of 1999.

This Wired for Sound cab ride, filmed from the footplate of 47827, features not only that delightful route but also the North Downs line between Guildford and Reading - another line rare for locomotives.

Not only was this programme during the brief period when Class 47s were standing in for HSTs on this CrossCountry service, but also before the trains began terminating at Portsmouth & Southsea because of weight restrictions on the harbour's wooden pier.

After leaving the harbour terminus, the 1M32 calls at the nearby stations of Portsmouth & Southsea and Fratton before joining the south coast route at Farlington Junction for the run to Havant.

From there, the train heads north over the Portsmouth Direct Route where it passes various slam door EMUs and Class 442 'Wessex' units.

The first task for the Sulzer 47 is to climb the eight miles of the scenic South Downs through Rowlands Castle to Buriton summit, the last two miles of which are at a gradient of 1 in 80.

After descending to Petersfield, there then follows another climb - this time for 13 miles over the western Weald through Liss and Liphook to Haslemere. This includes a standing start on a gradient of 1 in 101 at Haslemere station.

47827 then descends to Guildford and its two tunnels under the North Downs.

From there, the 1M32 takes the North Downs route to Reading, where the taxing two mile 1 in 100 climb out of Guildford is made all the more difficult when the train is brought to an unscheduled stand by a track circuit failure half way up the bank!

The journey continues across Surrey Heath through Ash Vale, North Camp, Sandhurst and Wokingham to Reading where it takes the 'Reading Spur' to connect with the Great Western Main Line.

Filmed over a decade ago, this programme is now a truly nostalgic experiece - no more Virgin CrossCountry, no more slam door EMU's, and no more loco-hauled passenger trains to Portsmouth Harbour or over the Portsmouth Direct Line.