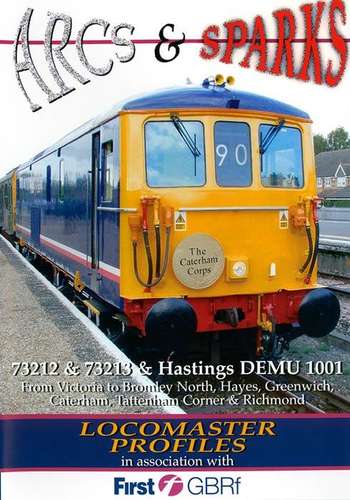 The train's route around London and several EMU-only Southern branches was truly mind-boggling and this programme will feature the best of what was a remarkable itinerary.

Starting at Victoria on board 73212, the ED tackles the stiff climb out of the terminus on its 650hp diesel engine, before switching over to the 'juice' for the run to Bromley North.

73213 then hauls the train via Lee Spur, Crayford Spur, Charlton and Greenwich to London Bridge.

Another reversal allows 73212 to work the train forward to Hayes via Lewisham before 73213 heads back to London Bridge via New Cross.

73213 then works the train via Selhurst and Clapham Junction to Kensington Olympia where the loco switches to diesel power before continuing to Acton Wells and Gunnersbury and then over London Underground's District Line to Richmond!

The final section of the programme features a cab-ride on board the Hastings DEMU from Richmond to Victoria.

Part of the proceeds from the sale of this DVD will go towards Help for Heroes, the charity the 'Caterham Corps' raised funds for.