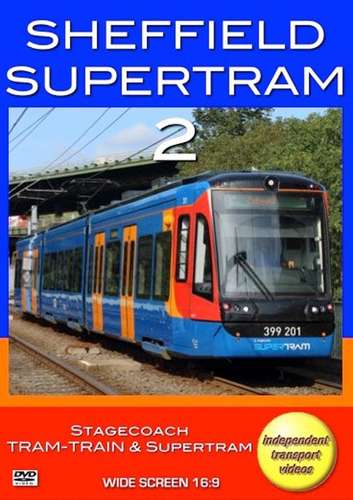 Independent transport videos welcome you to this second programme featuring the Sheffield Supertram system. This time we major on the recently introduced ‘Tram-Train’ route that runs from the Cathedral stop in Sheffield city centre to Rotherham Parkgate. On this route the Tram-Trains run along the existing tramway lines to the Tinsley – Meadowhall South stop and then join the National Rail line for their journey to Rotherham Parkgate, calling at Rotherham Central railway station. A fleet of seven German-built Vossloh AG ‘Citylink’ articulated sets are used. Known as TOPS Class 399, these Tram-Trains are painted in the Supertram blue livery and are numbered 399 201 to 399 207. Units 399 201 – 399 204 are only able to run on the Network Rail line, whereas 399 205 – 399 207 can be used anywhere on the tram system. We see 399 207 operating a blue route service during our filming.

To ensure you see the full picture of the Sheffield tramway operation in September 2019 we begin our filming during a weekday morning rush in the city centre. Locations featured are High Street, Castle Square, Fitzalan Square/Ponds Forge, Cathedral and Park Square. At Park Square, the triangular junction just off the tramway bridge, we see non-stop action as the trams and Tram-Trains enter and leave the city. At Cathedral we board Tram-Train 399 203 and get the driver’s eye view as we film the entire route to Rotherham Parkgate. Stop announcements are heard along the route and the actions of the driver are seen as the tram leaves the tramway system to join the National Rail line at Tinsley – a new section of track called the Tinsley Chord allows the tram line to connect to the rail tracks on the National Rail network. At Rotherham Parkway we get a grandstand view from a railway footbridge of the Tram-Trains running along the same lines as the heavy rail passenger trains. Our return to the city centre is filmed from the passenger’s point of view. Our cameras stop off and film at Rotherham Central, Tinsley-Meadowhall South, Nunnery Square, and Woodbourn Road before arriving at Cathedral. During the day of our filming we rode on all of the Tram-Trains scheduled for service on the route to Rotherham.

Whilst filming our previous programme of the Sheffield Supertram system in July 2018, the blue route was curtailed at Birley Lane due to a rail replacement programme. Now completed we have the opportunity to film the line from Halfway to Birley Lane. Filming begins at the terminus at Halfway where we take a ride on Duewag/Siemens AB88T tram, number 103 for a journey to Birley Lane. We also ride on trams 119 and 108 as we alight and film at Crystal Peaks and Birley Moor Road before arriving at Birley Lane. We hope that you enjoy this programme of the Sheffield Supertram system featuring both trams and Tram-Trains in service.