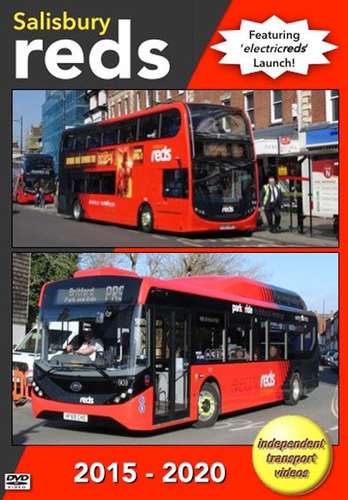 The main bus operator in the lovely historic cathedral city of Salisbury in the county of Wiltshire is Go South Coast, with their buses branded as ‘Salisbury Reds’. The previous fleet name was Wilts & Dorset, well known in the area for many years. The original Wilts & Dorset Motor Services company started operations in 1915 and operated until 1972 when it merged with neighbouring Hants & Dorset. The Wilts & Dorset name reappeared in 1983 when Hants & Dorset was split prior to deregulation and was then bought by a management buy-out in 1987. The Go-Ahead Group bought the privatised company in 2003.

This DVD programme follows the Salisbury Reds fleet operating in Salisbury over a five-year period from 2015 to 2020, when the independent transport videos cameras visited the city on nine separate occasions! Filming locations include Blue Boar Row, Castle Street, Silver Street, Brown Street, Milford Street, New Canal, South Western Road and Fisherton Street to name but a few. Other locations include Odstock Road and Downton Road just out of the city centre. Apart from the Salisbury Reds buses we see other operators that serve the city, namely Stagecoach with their services to Andover and Firstbus with their services to Bath and Warminster, latterly in the smart ‘Discover’ livery. We also see the orange buses from the Wheelers fleet, which stopped operating in Salisbury in 2018. Other Go South Coast brands seen are ‘Tourist’ and ‘morebus’ who operate the X3 service that runs to the city from Bournemouth. Operated by Ringwood depot we see ‘morebus’ liveried ADL Enviro400 double-deckers running into the city up until November 2016, as in December 2016 they were replaced by a new fleet of ADL Enviro400MMC double-deckers complete with tables on the upper-deck and a striking new livery. The Salisbury Reds livery was all-over dark red until the beginning of 2019 when a new dark grey and bright red livery was introduced. We see this livery spreading across the fleet as our visits reach 2020.

Probably the highlight of this DVD programme is the launch on Thursday 30th January 2020, of the first electric buses for Go South Coast. Allocated to the park-&-ride route from Britford park-&-ride site via the city centre to the Petersfinger park-&-ride site, we film the launch of the three BYD ADL Enviro200EV single-deckers seating 34 with space for 44 standees. Numbered 901-903 (HF69 CHL/N/O) they are part of a £1.2m investment programme and are branded ‘electricreds’. We join the BBC television ‘South Today’ programme presenter and cameraman for a publicity journey from Britford park-&-ride to the city centre where all three buses were on display for the public to inspect. We take a good look at these buses that includes another ride to Britford when we film the driver’s view of the route. Our programme concludes with further scenes of Salisbury Reds buses in action in the city during February 2020. We hope you enjoy your visit to this historic city and enjoy the ‘reds’.