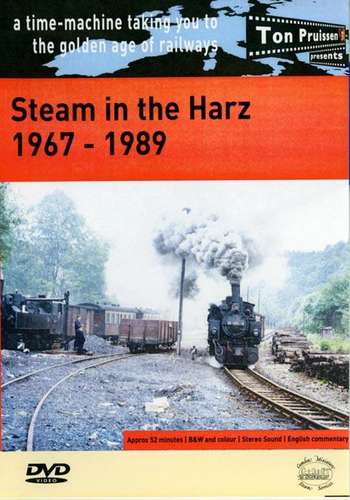 Today the Harzer Schmalspurbahnen is justly world famous, but, when Ton Pruissen filmed it before the fall of communism, the railways that now form it were just three more Deutsche Reichsbahn narrow gauge lines.

This DVD covers two of the three systems, namely the Selketalbahn and the Harzquerbahn; during the communist era the Brockenbahn and parts of the line between Eisfelder Talmühle and Wernigerode were off-limits, although the permitted sections are seen. There is also some footage of nearby standard gauge lines.

Locomotive types seen in service, all tank locomotives, include the single 2-6-2, plus 2-10-2s and 0-4-0+0-4-0 compound mallets. The considerable passenger traffic handled by the lines is clear, especially winter-sports enthusiasts, as well as goods, either in mixed trains, or using of transporter wagons.
Much of the film was shot in winter, and there are some spectacular shots of trains in the snow.

As always the original film is excellent and the sound is so good you really cannot tell that it is dubbed. The commentary, in English, by Ton himself,can be switched off leaving you to appreciate the authentic sounds. " Really great - that is just the right thing to say about this film... Unique historical scenes, wonderfully "composed" and authentic as well as having a humorous commentary. Very interesting, and full of a fascinating atmosphere... A film to watch many times!I am enthusiastic - my expectations were high but they have been exceeded!"Dirk Bahnsen, Marketing Manager of the Harzer Schmalspurbahnen, commenting on the German language version of this DVD.