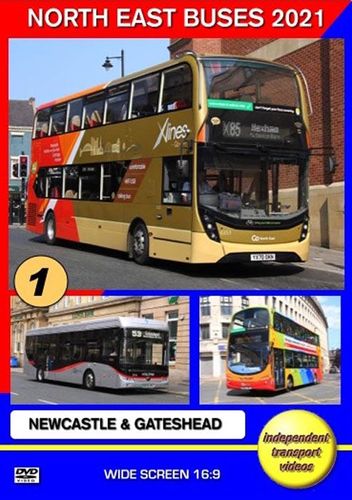 England’s North East region is an absolute gem of an area for the modern day bus enthusiast. The independent transport videos cameras made a visit to the area during 2021 to record the action for you to enjoy. With so much to film we have had to separate the video footage into three programmes!

This, the first in the trilogy, covers Newcastle-upon-Tyne and neighbouring Gateshead. The main operators in the area are Go Ahead with their Go North East fleet, Arriva North East and Stagecoach with their Stagecoach North East operations. Other operators seen briefly are Peter Hogg of Jedburgh, A-Line Coaches of Gateshead and buses in the Nexus (Transport for Tyne & Wear) livery. The first section of this DVD programme concentrates on Newcastle city centre, namely the Haymarket and Eldon Square bus stations and various streets in the city centre. There are a vast number of different liveries to been seen. Most colourful are on the Go North East (GNE) buses with many buses wearing route-branded liveries. The most striking are the ‘X Lines’ services, a network of routes offering limited stop and express services linking the cities, towns and small communities in the north east. GNE also have a generic livery of red and blue separated with white and yellow flashes towards the rear of the vehicles. GNE also operate a fleet of nine all-electric Yutong E10 single-deckers mostly on the busy 53 & 54 routes linking the city with Gateshead. Modern double-deckers include ADL Enviro400MMC and Wrightbus StreetDeck buses together with a good variety of older types. A good variety of single-deckers are also seen in service. Arriva are sporting their latest livery together with buses still in the older scheme as well as a number in both ‘Sapphire’ and ‘Max’ brands. Stagecoach is another operator introducing new livery schemes and these are seen on this programme in abundance. After a few brief shots of GNE buses operating in the Newcastle suburbs we turn our attention to Gateshead, the large neighbouring town across the River Tyne which has a superb bus station, ideal for recording the buses coming and going that are mainly from the GNE fleet. Staying in Gateshead we have an excellent sequence of shots of buses operating over and through the many river crossings of the River Tyne. Look out for the Go North East ‘Toon Tour’ bus, an open-top Plaxton President operating on this picturesque service. Our next location is the Metrocentre, a huge shopping centre situated just out of the town.

Our final shots on this packed and busy programme are filmed adjacent to the famous Antony Gormley sculpture – Angel of the North. Completed in 1998 this massive artwork is located close to the A1 road. We see GNE buses in their ‘Angel’ livery passing beside it. We hope you enjoy this first part of our visit to England’s North East featuring the many buses operating here.