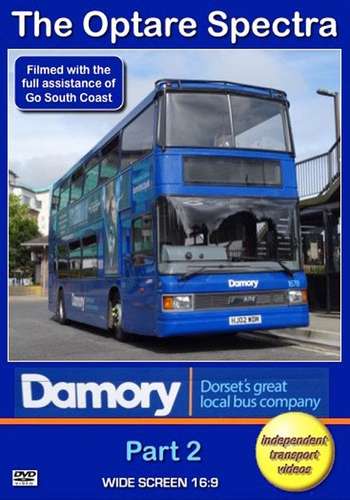 The second programme in our Damory DVD trilogy focuses on the Optare Spectra bodied DAF double-deckers. These buses were the mainstay of the Wilts & Dorset fleet for almost 24 years and during their latter days a number were cascaded into the Damory fleet. Originally turned out in Damory’s smart two-tone blue livery, they later received the all over dark blue scheme in line with other members of the fleet. At the time of filming in summer 2017, the Optare Spectras were about to be withdrawn from service. The independent transport videos cameras were fortunate to capture some of them in action during their last week of operation, and in order for us to film a re-creation of the 387 service from Poole to Dorchester, Go South Coast kindly lent us 1678 (HJ02 WDM) just three days before it left the fleet.

Our filming begins near Rockley Park and we see a Spectra operating the 152 service from Poole at various locations along the route. Our next location is Darbys Corner where we catch them in action on the Poole Grammar School contract. A little later in the day a Spectra turns up on the Asda Poole contract that shows the varied use these vehicles had while operating for Damory. The main feature of this programme is the re-creation of the 387 service from Poole bus station to Dorchester South Station. We join 1678 (HJ02 WDM) at Poole bus garage as it leaves for the start of its journey at Poole bus station. We then travel onboard the bus getting both the driver’s eye view and that of a passenger on both upper and lower decks. We travel along this picturesque route passing through countryside and villages. These include Lytchett Matravers, Bloxworth, Bere Regis, Tolpuddle, Puddletown and many more, all captioned as we progress on our journey to Dorchester. We have also included some still photographs of buses that would have operated the service in years gone by to add to your enjoyment. We then arrive at Dorchester South Station thus completing the outward journey. The bus returns to Poole going via Winterborne Kingston where the bus makes another reverse turn on its journey. Arrival at Poole bus garage sees 1678 travelling through the bus wash and being parked up for the night.

We conclude this programme with some bonus footage taken by former Damory driver Stuart McGill of the Wilts & Dorset company launch of the Optare Spectras. This event took place on the 20th April 1993 at the Thruxton Motorsport Centre, where the new double-deckers were driven around the circuit by the ‘racing drivers of the day’! Our programme finishes with a selection of still photographs of Damory buses operating the 387 back in previous years.