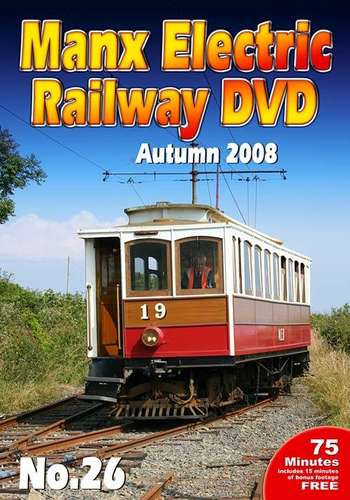 News coverage from the Manx Electric from the summer of 2008:

The summer of 2008 will not be remembered as a classic. With the Laxey - Ramsey section only working as a single line, a limited timetable in operation, few specials and a shortage of tram crews, the year is perhaps best forgotten.

It wasn't all doom and gloom as although the number of trams in service decreased, those which ran had to contend with some unusual and never seen before working practices.

Using mostly the landside track between Laxey and Ramsey this programme looks at how the service worked with passing loops at Dhoon Quarry and Ballaskieg and a bizarre 'slew' in the track near Ramsey. In 115 years of service, it's never been like this before!

See cars 5, 6, 9, 19, 21 and 22 with trailers running wrong line, passing at Ballaskeig and doing things they don't normally do! With the MER now closed again and expected to be 'normal' in 2009 - this is rare film and it will never happen again!

For the first time ever on this series, see amazing footage of diesel works car 34 running under its own power; car 16 with trailer 43 made a rare outing to Ramsey on Saturday 2nd August.

The journey is followed on a fine sunny day and includes stunning film of the pair climbing to Ballaragh; cars 2+49 are seen on a private hire and car 9 is featured on the Groudle shuttle.

MER Scrapbook: The latest edition of the scrapbook takes a look at some of the unusual combinations which have run over the past decade either at the request of enthusiasts, for special events or by accident!

Bonus Footage: The IOM 30 Group hired No.10 'G H Wood' with two coaches and a mail van for a special trip to Port Erin. Various run pasts of this odd combination are included with 4 'Loch' and 13 'Kissack' on service trains.