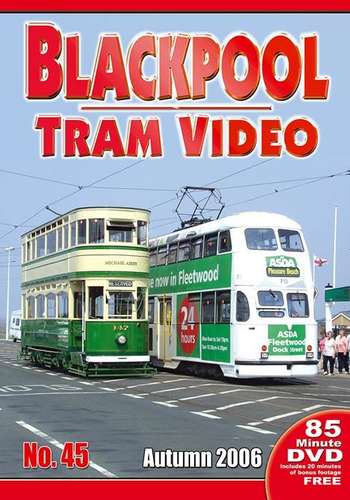 Video 45 features a comprehensive round up of news and features from summer 2006 including all the new tram liveries:

Boat 605 dewired at Heathfield Road on 13th June bringing chaos to thisMarket Tuesday. There's full coverage of this incident with 605 being towed by 939, 939 repairing the wires, 718 towing 605 to depot and numerous trams on the rarely used crossover at Broadwater.

Footage from the Totally Transport event in June with Coronation 304 and test tram '611'; Car 706 made a rare appearance on the Cleveleys timetabled service on 29th June. See the tram at various locations at dusk and after dark.

Stockport 5 was specially 'de-mothballed' for an enthusiasts journey toFleetwood on 15th July. We followed the tram as it made its way north; The annual Fleetwood Tram Sunday event took place on 16th July. The procession of Vintage trams was filmed heading to the event with 605, 5, 700, 633, 604, 40 and 713. Cars 706 and 66 also made it to Fleetwood. Car 40 was first on the Vintage tram shuttle and for the first time on this video series, the reverse move at Thornton Gate is featured. The day concluded with 304 and '611' heading for depot.

Car 147 was named 'Michael Airey' on 20th July. See complete footage of the naming ceremony and then 147 headed for Fleetwood.

Car 648 returned to service in July following a part-heritage overhaul. The tram is featured in detail at Cabin.

The former Permanent Way car 259 (624) passed into preservation during the summer and was taken for one last run on 5th August. See exclusive footage of the beaten and bruised 259 as it ran for the last time before a major restoration job began.

Twins to Fleetwood. With too many tram replacement buses in operation, the traditional Market Tuesday was a disappointment during Summer 2006 but on one occasion, three Twins and a whole host of double deckers made it through. See colourful Twin cars on Lord Street and a surprise visitor!

Time Traveller:
The man with the time machine travels back to 14 years to 1992 and what a different tramway it was then.