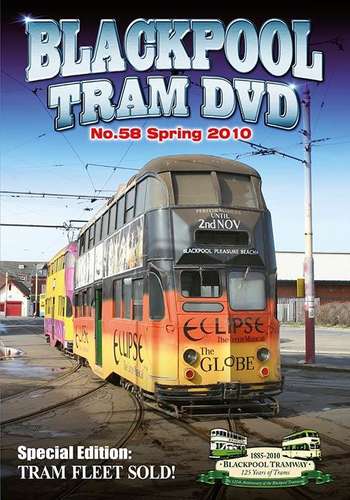 How can you produce a tram DVD when there have been no trams running?

It's true, the tramway was closed during winter 2009/2010 but while the trams stood idle a remarkable event took place - Blackpool Transport sold most of them!

With the 'Supertrams' on the horizon it was hoped a handful of cars would be preserved or retained. Instead, 40 cars were purchased by enthusiast groups, societies and private individuals.

Although some of them will remain in Blackpool until 2012, the majority will be leaving the resort soon. 712 is off to Crich, 619 is heading for Heaton Park and 703 is going to Beamish.

This special edition of the Blackpool Tram DVD looks at all the trams that have been sold. Many of these cars had been stored since 2004 while others ran during 2009 but none of them will ever run in Blackpool again.

The sale of so many trams is not only the end of an era, it also marks the splitting up of the famous Streamlined fleet, first introduced to Blackpool in 1934 and the face of the tramway today.

In addition, this DVD looks at the first phase of the 'Supertram' upgrade with the new tram depot under construction at Starr Gate, various track renewal, overhead rewiring and the new platforms at tram stops.