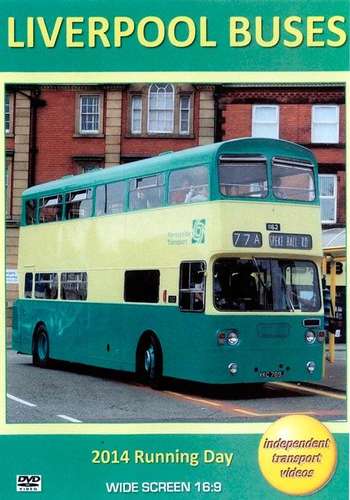 Once again the independent transport videos cameras have returned to Liverpool to record the annual Liverpool Buses Running Day organised by the Merseyside Transport Trust. This time we have included some of the modern vehicles running alongside the preserved examples to give an interesting comparison of how bus design has changed in the last 60 years or so.

On the day of the event, Sunday 14th September, Arriva were also operating extra buses on rail replacement services. We also saw a number of Stagecoach single deckers in the shape of ADL Enviro 300s. We film the arrivals of some of the static display buses, including a Chesterfield Corporation Daimler Fleetline and an East Lancs bodied Leyland Olympian in the deregulated Midland Red livery. As the morning moves on the MTT vehicles start to arrive and take up their duties. Our first ride of the day is on board an old favourite, L501 (501 KD) the 1962 Earls Court exhibit, Leyland Atlantean PDR1/1 with an MCW body. Our journey takes us to the Pier Head, where there is plenty of action for you to enjoy. We see a former Crosville Lodekka FS, DFG38 (319 PFM) operating the H1 service, as well as former Ribble Leyland Olympian 2101 (GFR 101W) adding realism to the scene around the graceful buildings, which were the backdrop for these vehicles in the years gone by. Look out for open top Atlantean 1449 (GKA 449L) recently repainted and now sporting a yellow front to commemorate 30 years since the Liverpool Garden Festival, when MPTE, Ribble and Crosville buses were thus treated.

We now board recently restored ‘Jumbo’ Leyland Atlantean PDR2/1 with Alexander bodywork 1162 (XKC 789J) for a ride to Penny Lane to record the operations at this interchange. Enjoy the sites and sounds from this massive bus as we take the journey through the streets, often passing other MTT buses running their services. After recording the action we board A36, the 1953 AEC Regent III with a Crossley body for a ride to Liverpool South Parkway. Our cameras record both the passenger and driver experience of the journey.

More action is recorded here of both preserved and present day buses before we board dual purpose Leyland National, 1000 (OHF 858S) for a ride to Speke Hall, a property owned by the National Trust. For comparison we return to LSP on board A36 riding on the upper deck this time. Filming continues as we record the end of the running day where we started some nine hours before. We would like to extend our thanks to everyone involved in organising this excellent Running Day. To conclude this programme we have re-edited some cine film shot by Dave Anders of Liverpool buses running in service during the 1970s. It is interesting to note how many types have been saved in preservation for us to enjoy today!