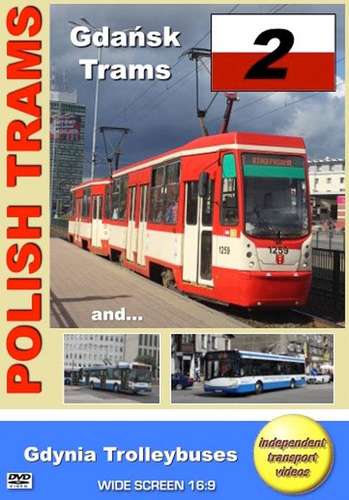 The Polish city of Gdańsk is situated on the Bay of Gdańsk almost 300 km north west of the capital Warsaw. It was integrated into Poland after the Second World War in 1945 and along with the neighbouring cities of Sopot and Gdynia are often referred to as Trójmiastro (Tricity), being an important centre in northern Poland. In recent years Gdańsk became famous for the Gdańsk Shipyard worker, Lech Wałęsa, who became the leader of Solidarity that eventually brought down the communist system in eastern Europe and changed Poland’s political system. The independent transport videos cameras visited the cities of Gdańsk to film the trams and to Gdynia to film the trolleybuses in June 2018. We start in Gdańsk. Horse trams began operating here in 1873, with electric trams starting in 1896. Over the years the system has grown to cover some 55 km with 10 regular lines. Trams are operated by GAiT (Gdańskie Autobusy i Tramwaje), but as in most Polish towns and cities there is a regional transport authority that offers ticketing for use on all local trams, buses and trains - here it is ZTM w Gdańsku. The tram fleet at the time of filming was made up of an interesting mix of vehicles. Konstal 105Na type are starting to leave the fleet, most having had some form of modernisation over the years, Alstom Citadis 100, Bombardier Flexity Classic and Duewag/Modertrans N8C-NF – that began life in Dortmund and Kassel in Germany. Current modern low-floor trams are Polish built PESA Swing and Jazz trams. The livery is cream and red, but the Alstom Citadis trams (1001-1004) and Duewag/Modertrans 1161 are painted in an ivory and blue trim livery representing a former livery of the city. Our filming takes place at many locations across the city. These include Akademia Muzyczna, Plac Solidarności, Wały Piastowskie, Dworzec Głowny and Wały Jagiellonśkie. Four tram rides are taken on trams 1116, 1113, 1036 and 1014 to the destinations of Stogi Pasanil, Opera Bałtycka, Strzyźa, Oliwa and Jelitkowo. At the latter, we see the only Konstal 3-car set, 1349+1350+1346, in operation in the city. We conclude our visit to Gdansk with a tour of the city on a preserved 1952 Konstal N car. Enjoy your ride!

The second part of this DVD programme is filmed in Gdynia. Trolleybuses were introduced here in 1943 due to the lack of fuel available and over the intervening years a large system has grown up covering some 40+ kms. Operated by PKT Gdynia this smart blue and white liveried fleet consist of low-floor Solaris Trollino 12 (Types 12T, 12AC and 12M) trolleybuses. Older vehicles are Mercedes Benz O405NE trolleybuses. Since 2011 two Citaro O530 buses and three Solaris Urbino 12T buses have been converted to electric traction as trolleybuses and 3054 and 3042 are seen operating on this programme. Our filming begins at Gdynia Dworzec Główny and continues along Jana z Kolna, Wójta Radtkego and 10 Lutego. We ride on trolleybus 3059 to Wielkopolska and on 3072 to Sopot Reja. Further filming takes place on Sunday along Swiętojańska where we see vintage trolleybuses in service on route 326. These include a Jelcz trolleybus in red and cream livery from 1994 and a 1957 Saurer trolleybus that began service in St Gallen, Switzerland.