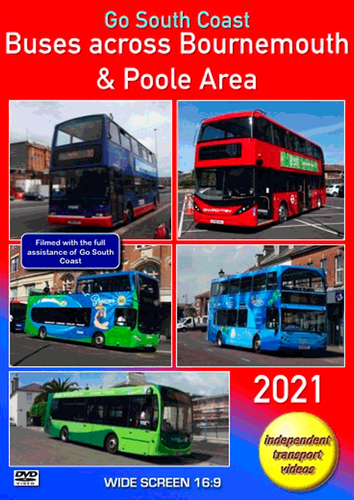 There is a great deal of interest for the bus enthusiast in this area of the country. This part of Dorset and west Hampshire is home to Bournemouth Yellow Buses and the Go-Ahead subsidiary Go South Coast (GSC) of which their ‘more’ bus operation is the subject of this DVD programme. Before Go-Ahead, it was the management buyout of the former National Bus Company subsidiary Wilts & Dorset, formally Hants & Dorset that was the main company operator in the area.

This DVD programme filmed by the independent transport videos cameras reviews the year of 2021 and features a number of locations across the Bournemouth and Poole area. To begin with we take a brief look at some video shot in 2019 at Bournemouth and Wimborne and some in 2020. Of course 2020 was the first year of the global coronavirus pandemic and mid-part of the year was covered in our programme “Buses In ‘Lockdown’ – South Coast”. During the latter part of 2020 we visited the GSC depot in Bournemouth and filmed action in Ringwood, Bournemouth and Poole. At the second visit to the Bournemouth depot we see a former Go-Ahead London Wright/Volvo double-decker being assessed at the depot prior to being repainted in the revised more bus livery. A total of ten double-deckers were transferred from the capital to provide extra capacity. Seven were ADL Enviro400s and three Wright Eclipse Gemini/Volvos. Five Enviros are in Bluestar livery for Southampton and the remainder in more bus livery, which you will see in this programme! The main part of this programme is the review of 2021. Interesting buses to look out for are the Plaxton President Volvo B7TL double-deckers in overall blue livery transferred from the training fleet and now back in passenger service providing extra capacity and in their twentieth year of service. They are also former Go-Ahead London buses transferred in 2011. Also look out for ‘Thunderbolt’, 366 (SN51 AYP) a former Thamesdown Dennis Trident with Plaxton President bodywork originally from Lothian Buses in 2015. Filming takes place in a vast variety of locations in our 2021 review. These include Bournemouth, Poole and their suburbs, Boscombe, Christchurch, Wimborne, Swanage, New Milton, Ringwood and the New Forest. The cameras cover towns, countryside and coast in this picturesque part of England.

The final part of this programme is a ride on BYD/ADL Enviro400EV City battery-electric demonstrator double-decker, LF69 UXJ, painted in Transport for London red livery. This bus was on loan to Go South Coast at Bournemouth from Friday 28th May until Tuesday 1st June. It was used on a Park & Ride duty over the weekend and demonstrated for the Bournemouth University ‘Unibus’ service on the Monday and Tuesday. The independent transport videos cameras were invited along to film the bus in action for an extended run to the Talbot Campus on Wallisdown Road, Bournemouth then returning in service on a U1 duty to Dorchester House on Holdenhurst Road near to the GSC Bournemouth depot. We hope you enjoy your visit to the south coast with the variety that is on hand to gladden the bus enthusiasts’ heart! 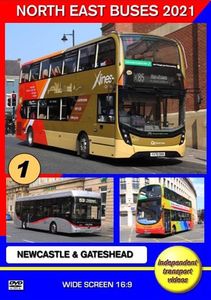