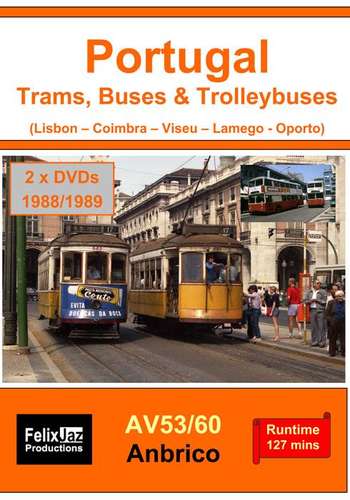 Section 1: At Praça do Comércio we see tram routes 16, 17, 18, 25 and 26 stop on their journey through this busy location. Routes 15 and 18 actually terminate here. Daimler Fleetline double and AEC single deckers can also be seen on service.

Section 3: Largo do Chiado sees route 28 negotiate the interlaced track on Rua Vitor Cordon. Then at Praça de Luis de Camoes we see 20, 29 & 30 up from Cais do Sodré.

Section 1: Coimbra buses and trolleybuses are in the city centre then a visit to the SMTUC Guarda Inglesa depot sees preserved tram 15 outside.

Section 3: Oporto River Douro Bridge of Luis sees buses and trolleybuses on the top deck. A trip is made over the lower deck by coach. São Bento is the next location.

Section 6: Boavista tram depot is seen, while on the roundabout outside tram routes 18 & 19 terminate and negotiate the busy traffic. We finish at Castelo do Queijo.