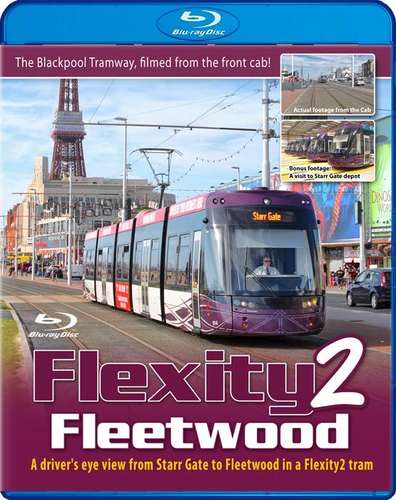 It was back in 2006 when this journey was last filmed, from the top deck of 706 'Princess Alice' along the old tramway. Nine years later and following many requests this is the updated version, along the new tramway with footage from the cab of a Flexity2 tram in normal passenger service.

Filmed with the full permission and the full assistance from Blackpool Transport the journey was filmed on board 003 on a gorgeous sunny afternoon in June. The entire is journey is shown - uncut - from the loop at Starr Gate to the terminus platform at Fleetwood Ferry.

Narrated by Blackpool Transport's Bryan Lindop, the guy who is the 'voice on the tram', we pass all the sights of Blackpool's promenade including the Piers and the Tower and from Cabin, some fast running through to Bispham, Cleveleys and Broadwater.

Using live cab sounds throughout, on screen captions show the tram stop names and narration is kept to a minimum.

As bonus footage, there's a visit to Starr Gate depot, featuring the Flexity trams as you've never seen them before. In the day, most of them are in service and the depot is empty! At 4am - the time of our visit - the depot was full! See the entire fleet lined up, creating stunning footage, prior to them going into service in the morning.