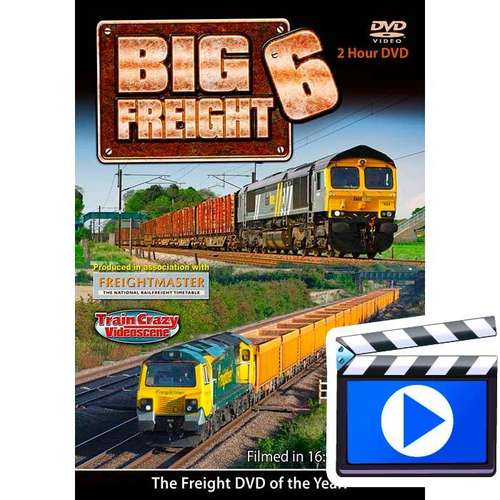 Train Crazy has once again teamed up with FREIGHTMASTER to bring you the biggest, heaviest and longest freight trains running in the UK today.

Filmed during 2010, Big Freight 6 looks at the freight scene from the year starting in the January snow and visiting various Hotspots from the FREIGHTMASTER books throughout the year.

Coal, steel, oil and cement. Intermodal, flasks, clay and logs. Ballast, mail, wagonload and water cannon trains to name just a few which are included on this DVD, hauled by everything from the Class 70 to the 37, 60 and 66 to pairs of 86s, 90s and 92s. At least two trains have five different locos on the front!

Rather than just train after train passing the camera, Big Freight 6 takes the viewer a little deeper into the world of UK freight with many trains filmed in unusual or picturesque locations such as on the S & C, Cumbrian Coast and in Scotland, adjacent to water or in the snow, passing semaphore signals and signal boxes or snaking out of long sidings and over bridges.

Remember, this is no ordinary freight - this is BIG FREIGHT!

Also available to buy on DVD and Blu-ray click here.