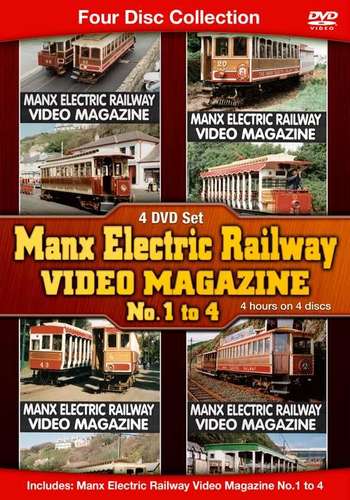 The Manx Electric Railway Video Magazine was first launched in 1999, originally only available on VHS cassette. The idea of the series was to record the MER in detail and its peak, by the early/mid 2000s, there were three tapes per year. Although the railway has been filmed many times over the years, this was the first time it had been recorded in great detail - particularly in winter.

20-years later and on DVD for the first time, this four disc set contains 1 to 4 in the series. The footage comes from the original Mini DV master tape and is unedited - exactly how it was released first time round.

No.1 includes: Footage from autumn 1998 and winter/spring 1999 with 22+58 on Ramsey service, winter trackwork, Laxey start and Car 27 on overhead duties.

No.2 includes: The return of car 20, summer timetable 1999 and the 1999 events with Ramsey Centenary day and Royal Trailer 59 in service.

No.3 includes: First day of MER operation in the 21st Century with Car 1 running to Groudle, Lisbon 360 moves to Derby castle and a day ay Dhoon Quarry.

No.4 includes: The 2000 gala fortnight with 16 and 26 on a parallel run and 9 with two trailers and a great day at Ballaglass.