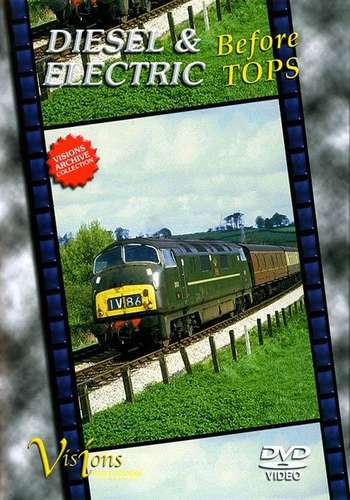 Diesel & Electric Before TOPS focuses on 1958 to 1973, before the computerised numbering system became visible on British Rail's locos.

The DVD features thirty different classes and is crammed with rare archive footage.

Newport in 1965, including a shot of D9509 on driver training
A selection of Sulzer-powered locos around Swinton in Yorkshire in 1964
Wath, with EE Type 3s, Brush Type 2s and 4s, Peaks and an EE Type 4 on inter-Regional services
A selection of 'Hymeks' in action
Fascinating footage from Cambridge depot in 1959, including Cravens DMUs and a BRCW Type 2
Guildford depot in 1966
Tinsley just after opening
An EM2 at Sheffield and EM1s on tour, including the pioneer Tommy
A 4-SUB unit at Wandsworth Road
D200 in 1959
EE Type 3 and Brush Type 2s in East Anglia
Deltics on named expresses at Doncaster
D221 before naming in 1960
Incredible scenes from Swindon Works, showing a Warship on test, Westerns under construction and NBL hydraulics moving by overhead crane
BRCW Type 3s at work on the Southern
Prototypes 10000 and 10201
A BTH Type 1 at Buntingford
Warships, Westerns, NBL hydraulics and Blue Pullmans at work on the Western
And lots more.