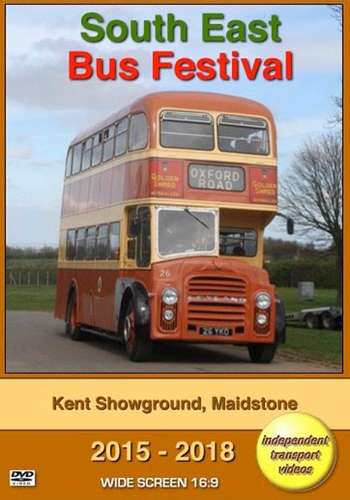 One of the highlights at the start of the year in the Bus Rally calendar is the South East Bus Festival, which takes place annually on the Kent Showground at Detling near Maidstone, Kent. The event began back in 2011 and the independent transport videos cameras are no stranger to it. This programme looks at the highlights of the buses and coaches attending the event over the years from 2015 to 2018. There is always a good display of buses and coaches to be inspected by the public in the main display area, with a selection of buses giving rides around the site with stops at the many attractions which include classic cars, commercial vehicles, model steam engines and a lot more! This DVD programme begins in 2015 with just a brief visit, before we view the 2016 footage, which features a parade of East Kent buses celebrating 100 years of service from 1916 to 2016.

Our cameras also film the buses and coaches giving rides from various locations around the showground through the years covered in this programme. This coverage extends to filming the departure of the buses and coaches at the end of each year’s event. Many fleets are represented, not just from the south east of England but also from many parts of the UK and even Malta! There are many vehicle types for you to enjoy including AEC, Bristol, Daimler, Leyland and many more. Modern vehicles include buses manufactured by Alexander Dennis, Scania, Volvo and Wrightbus to name but a few.

So there is a lot for you to enjoy on this DVD programme as we celebrate the “South East Bus Festival as it brings together buses and coaches, old and new, from across the South East and beyond”.