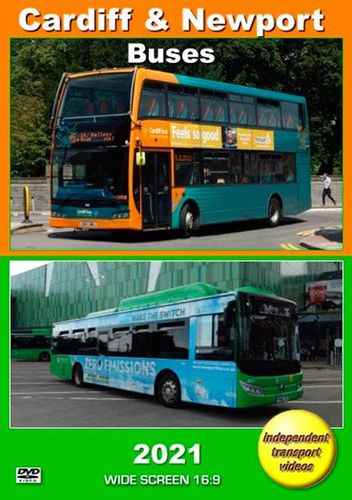 It is some seven years since the independent transport videos cameras visited South Wales to record the operation of buses in Cardiff, the capital of Wales and neighbouring Newport. A good deal has changed since our visit in 2014 and this is seen in this DVD programme. The main focus during our visit to Cardiff is that of the local operator, Cardiffbus, a bus company still wholly owned by Cardiff City Council. This interesting fleet has a good variety of vehicles for the bus enthusiast. Introduced in 2006 there is a fleet of Scania articulated buses, which will leave the fleet in early 2022 as well as their ‘rigid’ cousins, the Scania OmniCity that were introduced in 2007 and are still in service. There are also Mercedes Benz Citaro single-deckers, some from the Isle of Man and a good selection of Alexander Dennis buses in the shape of Dennis Darts in varying lengths, Transbus Enviro300s and the latest ADL Enviro200MMC bodied single-deckers. You will also see Wrights-bodied Scanias in this programme. Double-deckers also form part of the fleet and include East Lancs Olympus-bodied Scania N230s introduced in 2007/8 and the newest double-deckers are ADL Enviro400MMCs that joined the fleet in 2015 and can carry 99 passengers.Our filming locations include Duke Street, Castle Street, Westgate Street, St Mary Street, Canal Street, Bute Street and Churchill Way.

Other operators captured by our cameras include Adventure Travel, which operate both local and long distance routes in South Wales, First Cymru, and Stagecoach South Wales. Look out for the TrawsCymru liveried MCV Evora-bodied Volvo B8RLE single-deckers operated by Stagecoach South Wales. Open-top tour buses seen are those operated by Tootbus and also Readingbuses 520 (V524 ESC), a Plaxton President on loan to Cardiffbus. Newport Bus are also recorded on the 30 service that runs in from Newport. We now travel to the city of Newport and film along Kingsway and at the busy bus stations. The main one is served by Newport Bus and the other adjacent station is used by Stagecoach and for longer distance routes. Like Cardiff, Newport Bus is wholly owned by Newport City Council. The biggest change here since our last visit in 2014 is the introduction of the first electric bus fleet in Wales. A fleet of 15 Yutong E12 single-deckers are operated, the first one arriving in 2018. Z01 (YK66 CBC) is a former demonstrator and was followed by a further 14 in 2020 numbered Z02 to Z15. Other single-deck types seen are Scania OmniCitys, Wright Meridian-bodied MANs and short ADL Enviro200s. Double-deckers include Dennis Trident ALX400s, ADL Enviro400s and new ADL400MMCs in a white and green livery. Other operators captured on film include Phil Anslow Coaches, Stagecoach South Wales and Cardiffbus, running the 30 joint service between the two cities. We conclude our South Wales trip with a brief visit to Chepstow where Newport Bus operate their 73 service to. We also see Stagecoach in both their own livery and in TrawsCymru colours.

To conclude our programme we take a look back in still photographs at Cardiff Corporation and Newport Corporation buses back in 1974, 1975 and 1976. Just see how they have changed!