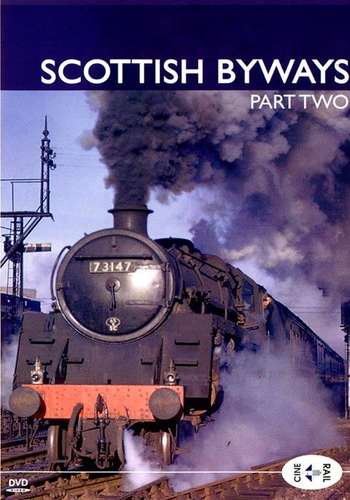 Described by the LMS as 'The Gateway to Scotland', Carlisle is the starting point of the programme with scenes filmed in 1962 at Citadel Station and Kingmoor Depot.

North of Carlisle on the WCML, Beattock Station is featured and, after scenes here and on the incline with the steam bankers hard at work, the next location is Carstairs with film of a railtour headed by a 'Duchess'.

This is followed by scenes at Stranraer, Ayr and the Waterside mining complex with its associated heavy coal trains.

Returning to Carlisle, the Waverley Route is followed with steam traction much in evidence at Edinburgh's Millerhill Yard, Whitrope, Shankend, Hawick and Galashiels.

From St. Boswells, the line to Kelso, Coldstream, Tweedmouth and Berwick-upon-Tweed is traced and, north of Berwick, the branch lines to Eyemouth and North Berwick feature.

The next area to be shown is Fife, with film taken in 1960 on board a special working from St. Andrews to Thornton Junction via Methil Docks and Buckhaven.

After Thornton, the Leslie Branch is viewed, followed by with Lindores.

Leaving Fife behind: Stirling, Dunblane, Callander and the line through Glen Ogle feature, including film of the Killin and Ballachullish Branches.

The West Highland Line is next, with film of the preserved 'Glen Douglas' and an ex-NBR Class J37 leaving Crianlarich in 1963 as they head for Fort William.

Moving to Perth, film taken in 1930 shows a wide range of pre-grouping locomotives that offer an interesting contrast with locomotives recorded on film thirty years later.

Aviemore is left on board a railbus service to Boat of Garten, Grantown and Craigellachie, with many of the stations on this route captured on film, before moving north to Elgin.

From there, the Moray coast route via Buckie, Spey Bay and Cullen is followed, together with a journey on the branch to Banff, and arrival at Cairnie Junction brings the main programme to a close.