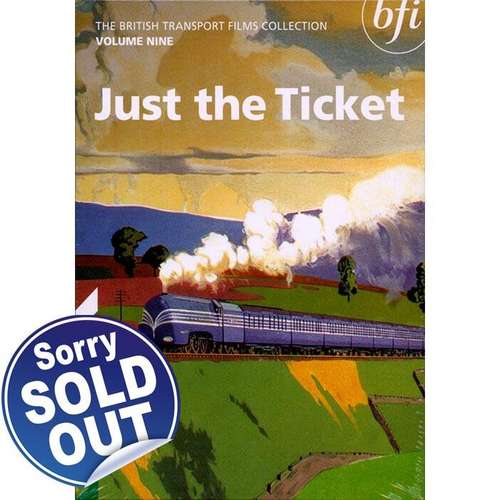 Following the nationalisation of transport in 1948, the British Transport Commission set up its own in-house film production unit. Launched on 1st May 1949, and led for 25 years by Edgar Anstey - a founding father of the British documentary movement - it became one of the largest industrial film units in Britain.

All these films are now preserved in the BFI National Archive. This selection has been digitally remastered for this two-disc, which is must not just for the transport enthusiast, but also for the documentary aficionado who will recognise traits and innovation in British non-fiction filmmaking.

'Just the Ticket' contains over four hours of British film classics, with particular focus on the staff training film, a genre often wrongly neglected but no less creative and accomplished by the award-winning BTF unit.

A good number of films such as 'Lost, Stolen, Damaged', 'Manhandling' and 'It Takes all Sorts' were likely unseen by the majority of the British Public, but that in no way diminishes their originality or charm.

Berth 24 (1950, 40 minutes) - The first production of the newly formed British Transport Film Unit. Set in the Hull Docks, it describes the 'turn around' of the steamer S.S. Bravo, following her arrival from Gothenburg with various cargoes and then loading and departing again for Sweden. For an army of men, from river pilot to stevedore, each turnaround is a test of professional skill, and a race against time if tides are to be caught and schedules kept. The film tells the story of what this means to George Moore, a foreman docker, and to a Swedish passenger who comes to England as a buyer of our goods.

Peak District (1954, 20 minutes, colour) - The Peak District waits invitingly within a sixty-mile reach of half the population of England. To this green centre of a great industrial area, the first of the National Parks, holidaymakers come throughout the year to enjoy a wide variety of scenery and of pastimes. Some visitors come to glide, others to go 'caving' or climbing, boating or fishing. The lovely surroundings vary from the windy flat tops of heath with their rocky outcrops to the lush sheltered dales of the Manifiold, the Derwent and the Dove; from the simple stone cottages of the quiet villages to the historic architecture of Ashbourne, Bakewell and Buxton, and the great houses of the past like Chatsworth and Haddon Hall.

Train Driver (1966, 10 minutes) - A documentary account of the work of the modern train driver, illustrating his duties both preparatory to and during the journey. Based on instructional material, this film explains the preparation and procedures for the operation of a then modern AC electric locomotive, also taking in diesel haulage and shots of steam traction. The opening sequence features an early use of the double-arrow BR logo. Intended for children aged nine and above.

Give Your Car a Holiday (1967, 18 minutes, colour) - ...and yourself too by travelling on Motorail and the car ferry ships of British Rail to the Continent and Ireland. A film to entice those who have yet to enjoy the pleasure of letting someone else do the driving, and to whet the appetite of those accustomed to putting their cars aboard.

Just the Ticket (1967, 8 minutes, colour) - A film to encourage travel on British Railways. Travel by train is for holidays, travel by train is for work, and travel by train can be a pleasure in itself. Howard Marion Crawford advises in verse to take advantage of all three possibilities and shows impressions of a wide variety of journeys, destinations and amenities. A selection of rail-borne experiences include the luxury of Pullman travel, the thrill of arriving at the seaside, and travelling through the Highlands.

Away for the Day (1952, 19 minutes, colour) - Whether it is a paddle in the sea or a visit to some Roman remains, a day spent watching the countryside go by or an afternoon's inspection of a famous house, a party outing by hired coach can be a real day out. This is the story of coach parties enjoying a wide variety of trips all over England and Wales, including West Wycombe, the Peak District, Dartmoor, Brighton and elsewhere, and an impression of the places they visit.

They Had an Idea (1953, 14 minutes) - In every industry men still need skill and knowledge, but the addition of a dash of imagination will often mean more pleasure from the job as well as greater efficiency. The film presents four examples: the invention of a ratchet device for turning rails; reshaping worn spanners at a locomotive works; speeding up the replacement of old escalator slats by means of an attachment to a drill; and finally, the thoughtful porter working at a country station who goes out of his way to warn a regular passenger of a change in the timetable.

Manhandling (1962, 10 minutes) - Staff Instructional Film. 'It ain't what you do, it's the way that you do it' - the popular song is particularly apposite when you lift heavy weights, as many railwaymen know to their cost. The wrong way can produce aches, pains, strains, sprains, and even slipped discs. With the help of a young weight-lifting lady this film shows how to avoid all the strains and make the job easier into the bargain.

Go As You Please in Britain (1975, 18 minutes, colour) - This film shows some of the country's attractions which can be reached by rail. Whether you want a quiet holiday touring churches in Norfolk, a more active one enjoying Blackpool in autumn, or a cultural one at Stratford-upon-Avon, or the many pleasures of North Wales, these are all available and close at hand for those who travel in comfort by train.

It Takes All Sorts (1978, 20 minutes, colour) - It takes all sorts of people to make up a railway, both passengers and staff and we meet a variety of them in this film. We see a number of common everyday incidents which staff regularly meet and different approaches are used to deal with these problems. Each of these different approaches is examined and analysed. A training film aimed particularly at station staff.

Just Like the Rest of Us (1983, 24 minutes, colour) - Over 5 million people in Britain have some sort of physical disability. This film, addressed primarily to railway staff, demonstrates some of the problems encountered by hanicapped people when they travel by train. It then shows how sympathetic and practical handling can turn a daunting prospect into a pleasurable experience. A motivational programme for staff to introduce them to the disabled traveller and how they want to be treated - just like the rest of us!

Extras:
Booklet with film notes on all films and credits.