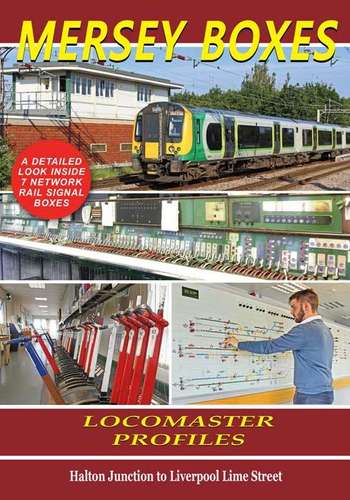 Our third programme on traditional railway signalling covers the eighteen miles of the busy Mersey main line from Halton Junction to the terminus at Liverpool Lime Street. Seven boxes and panels - each of them vastly different - cover this fascinating route. As well as five different passenger train operators, the route has six freight terminals dotted along it, and this programme features many of the signalling movements that are required for trains to access the various sites. At Edge Hill and Lime Street, such is the intensity of the passing passenger services that the Signaller had to provide a live running commentary as he signalled the trains. As you will see, there is absolutely no margin for error.

The seven featured boxes are: HALTON JUNCTION - the smallest of the seven, RUNCORN - which controls the Folly Lane freight only branch, DITTON JUNCTION - which controls two container terminals and the Ford automotive terminal, SPEKE JUNCTION - with its 86 lever frame, also controls Garston Freightliner terminal, ALLERTON JUNCTION - with its delightful 70 lever frame also controls access to Allerton depot, EDGE HILL - its vast and complex Entry-Exit panel controlling a continuous procession of passenger trains…and finally LIVERPOOL LIME STREET - the headline act of this programme with its magnificent Westinghouse 'L' type power frame with 95 miniature levers. Lime Street’s nine platforms are host to around 55,000 passengers each day and during a 12 hour day shift the Signallers handle a train movement approximately every two minutes. An axle counter failure at Huyton adds to the relentless action!

Produced with the full co-operation of Network Rail, this programme was filmed during the summer of 2017 while all seven boxes were still fully operational and before Lime Street station was remodelled. All the scenes in this programme will soon be history - Halton Junction and Runcorn have already closed and Lime Street is due to cease operating in July.