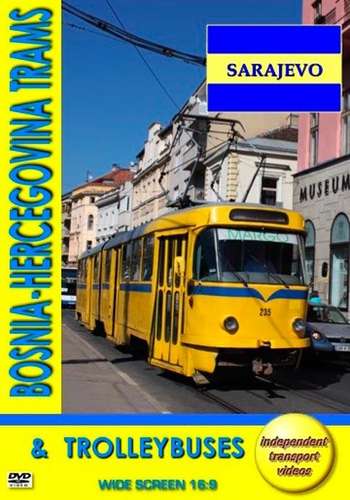 Bosnia-Herzegovina is a fairly new state created from part of the former Yugoslavia. It’s capital, Sarajevo, is now returning to normal after the Balkans war that raged between 1992 and 1995. There is still evidence of the war as some of the buildings are yet to be rebuilt.

The current standard gauge tramway was opened in 1960. This replaced a narrow gauge system. The current fleet is made up mostly of Tatra K2 AM6 cars, the earliest dating from 1973, but few survive from the initial batch of 90, as many were lost in the hostilities. Some have been rebuilt and modernised. After the war Vienna supplied some SGP cars, but these are now withdrawn, and some remain at the depot. There are also some former Amsterdam trams of which we see one running in service. Sarajevo also has a trolleybus system operating mostly second-hand vehicles, Solingen in Germany being one of the suppliers. At the time of filming the system was vastly reduced as new wires were being erected along some of the routes. The trolleybuses tend to run in their former liveries, some carrying overall advertisements. GRAS is the operating company for all trams, trolleybuses and buses in Sarajevo.

Our filming starts at Obala Kulina Bana in Baš?aršija, the old Turkish quarter which is the most easterly part of the system. Here we see the trams in bright sunlight against the backdrop of the recently restored city hall building. We make our way along this busy thoroughfare and go past the site of the assassination of Archduke Ferdinand, the incident that caused the outbreak of the First World War in 1914. We now board Tatra K2, 261 for the long ride to Ilidža on route 6. Ilidža is the most westerly part of the system where there is a shopping centre and housing. We then board former Bratislava Tatra K2 tram number 291, again on route 6, and alight at the GRAS tram depot on Bulevar Meše Selimovi?a. There is a good deal of action for you to enjoy as this busy stop is served by six different routes. Our next location is the railway station forecourt where we see the replica of an 1895 tram, numbered 15, running a tourist service under the brand of Nostalgia. Further filming takes place at Halida Kajtaza and Maršala Tita. We now turn our attention to the trolleybuses and film these interesting vehicles at Dobrinja terminal, Otoka terminal and along Grada?a?ka. Returning to the trams we do more filming along Bulevar Meše Selimovi?a and then return to Baš?aršija to film along Mula Mustafe Bašeskije where some of the damaged buildings can be seen. Maršala Tita is the site of the eternal flame, which gives us the backdrop as night time falls for our night time filming. We ride on Tatra K2, number 267 on route 1 to the railway station and after some shots at Zmaja od Bosne we board Tatra K2 number 201 dating from 1973 for our ride back to Baš?aršija. Our programme concludes with some still photographs from the camera of Steve Kelly who visited Sarajevo in 2002, 2003 and 2006.