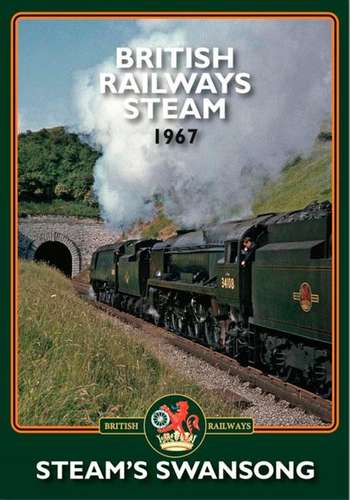 Never before seen on DVD, the first Oakwood programmes, marking the last 20 months of BR main line steam, are back by popular demand – complete with improved picture quality, maps, sound and the benefit of DVD navigation.

As 1967 began BR steam still had a wide geographic spread, but within 12 months it would be confined to north-west England, the year notable for the last mile-a-minute timetabled steam, the last (unofficial) 100mph+ steam expresses, the end of pre-Grouping steam, and the elimination of all Scottish, North Eastern and Southern steam. Cine film illustrates the following types in the last full year of BR standard gauge steam, Bulleid Pacifics, Fowler 2-6-4T, Ivatt Mogul, Stanier ‘Black Five’ and ‘8F’, as well as ‘B1’, ‘J27’, ‘K1’, ‘Q6’, WD 2-8-0 and ‘J94’ 0-6-0ST, and a range of BR Standards.

Goodbye to the Great Western – The steam operation between Shrewsbury and Birkenhead ended with the withdrawal of through Paddington services, this milestone being commemorated by a number of special trains – preserved ‘Castles’ join various BR Standards in a last tribute weekend to an ex-GWR main line.

Southern Surrender – The electrification of the Bournemouth main line heralded the end of steam on the Southern Region, main line footage being complemented by scenes of the last steam-worked branch line, to Lymington Pier.

Steam’s Last Stand – North-west England in 1967, featuring freight on the S&C line, West Coast main line action from Crewe, and over Shap to Carlisle, including banking to Shap summit.