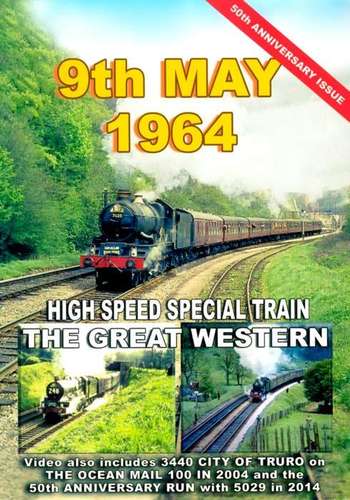 A major documentary based on the original by Tom Bodington made in 1994. All of the material has been digitally re-mastered and the programme, which was updated with new material and sequences in 2014, has been edited to broadcast standards.

In 1964 British Railways celebrated the 60th anniversary of 3440 City of Truro's epic run when it became the first locomotive to reputedly achieve 100mph. The Celebration was to run high speed Castle Class locomotives from Paddington to Plymouth and back for the very last time as diesels were rapidly taking over. This programme is a unique record of a major event that has almost been forgotten. It contains all the only known film of the event and was originally compiled in 1994. It was added to in 2004 and also 2014 to create a lasting and valuable record of the event.

Part Two The Ocean Mail 100 (28 mins)
This features the trips run in 2004 (8th/10th May), from Bristol to Kingswear and return, to commemorate the 100th anniversary of City of Truro’s record breaking trip. It features 3440 with cameras behind the tender and at the lineside.

Part Four 5029 Nunney Castle May 9th 2014 (25 mins)
Filmed on 9th May 2014 - 50 years to the day after the original event. Cameras were on the locomotive and train plus the lineside. This is another comprehensive record of the day.