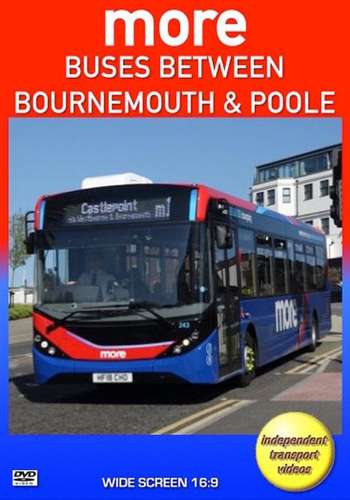 As you will see as you view this DVD programme, the title has two meanings! You will know from watching independent transport videos that you get plenty of bus action, and as the title suggests there will be more buses between Bournemouth and Poole for you to enjoy. Its second meaning obviously refers to the main bus company that operates between the two south coast towns, Go South Coast’s ‘more’ branded buses. So with the latter meaning in mind we concentrate for the main part of this programme on the introduction into service of the 41 Alexander Dennis Enviro 200MMC single-deckers that went into service in the spring of 2018. This fleet of buses are numbered from 220 to 260 and they had a grand launch at the Square in Bournemouth on Friday 23rd February. These new buses are for the high frequency m1 and m2 services that run between Bournemouth and Poole and replace the Wright/Volvo fleet that had served the routes since 2012, along with their similar predecessors since 2004. Our cameras were on hand to witness the event as the tape was cut by the Lord Mayor of Bournemouth with Go South Coast CEO, Andrew Wickham extolling their virtues as he invited the public to inspect the new buses. Just 220 (HF67 EUA) and 221 (HF67 EUB) were on display, as the rest of the batch would be delivered over the coming weeks for entry into service.

The second part of our programme records most of the new buses running in service. In April our cameraman walked the routes from Bournemouth to Poole filming the new buses along the routes, as well as the competing Bournemouth Yellow Buses. This date was chosen to see both the old and new buses in action together, as the final few ADL 200MMCs were still awaiting delivery. The Bournemouth locations include, Gervis Place, Terrace Road, Commercial Road, Poole Road and Westbourne. From here we film in Parkstone on Ashley Road, Richmond Road and Commercial Road. Further filming occurs on Longfleet Road, Poole before arriving at the final destination, Poole Bus Station. Here we film the build up to the evening peak services capturing all of the action. Look out for 2101 (YN06 GCO), the only Scania N230UB with Wright Solar bodywork, former Thamesdown (now Swindon’s Buses – GSC owned) Plaxton President/Dennis Trident and the tree-lopper passing the bus station!

The final part of this programme was filmed on May 28th, Bank Holiday Monday also at the bus station in Poole. By this date all of the new buses were in service on the m1 and m2 routes and we film the final two, 259 (HF18 CKE) and 260 (HF18 CKG) operating into the bus station. There is plenty of action for you to see as the ‘more’ and Yellow Buses arrive with people ready to enjoy their Bank Holiday in glorious sunshine!