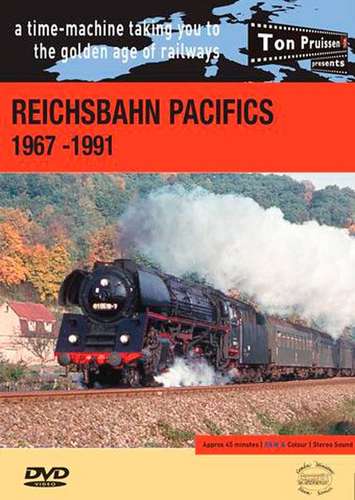 East Germany’s Deutsche Reichsbahn was the 'Last Great Steam Show' in Europe, and continued to modernise and develop its steam locomotive fleet into the 1960s. As a result, the 01 and 03 Pacific classes seen in this film differed in many details from West German versions of the same classes. In particular, there were the handsome, heavily rebuilt and modernised 01 locomotives of the 01 5 class, many with Boxpok wheels, some with Giesl ejectors and all semi-streamlined.

The film starts in 1971 with scenes of all three classes of Pacific at East Berlin's Ostbahnhof and Friedrichstrasse. It then moves to the frontier station of Eisenach where two“Interzonenzüge” (trains between East and West Germany) are seen hauled by 01 5 Pacifics, slightly strangely being either piloted or banked by class 44  decapods.

We then go to Stralsund, on the East Sea Coast in July 1978. Here we see the oil-fired three-cylinder Pacifics of class 03.10 (in the new computer number system numbered as 03.00xx). We look into the depot, and we visit the station. The Stralsund Railway Police (Transport Polizei) were always very friendly!

The next stop is Pasewalk, on one of the two lines between Berlin and Stralsund, also July 1978. Arrivals and departures of express trains headed by class 03.10, and a lot of atmosphere.

The last chapter of the film: Dresden and surroundings in 1977 during the last weeks of express steam on the Berlin to Dresden line, with Pacifics of classes 01 and 01.5.

Approx 30 mins. Very well shot B&W and colour footage, with on-location stereo sound dubbed in as only Ton Pruissen can do it. The film may be watched with or without commentary.