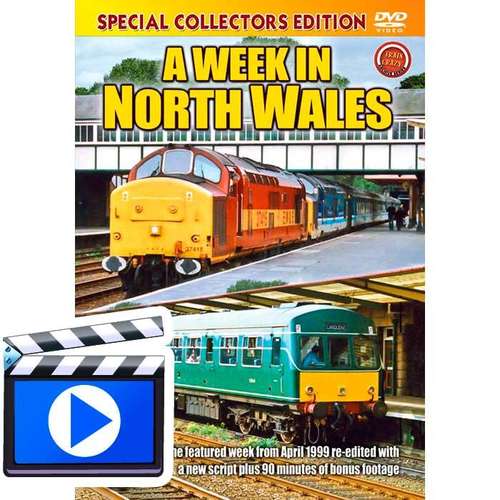 Ten years on, the ultimate video on the North Wales Coast line is available once again, but this time it's a special double disc DVD with 90 minutes of bonus footage - an all new version for 2009!

With class 37 and 47 hauled passenger trains, HSTs, ballast trains and class 101 'Heritage' DMUs, the line along the North Wales Coast was an enthusiasts paradise in the mid and late-1990s.

Being the last place in the UK to sample class 37 haulage, it certainly was the place to be but what about a week in the life of this scenic line, recorded in great detail?

A journey which starts at midnight at Holyhead on a Saturday and finishes near to Chester the following Friday?

This special collectors programme offers a unique chance to see the day to day running of a railway line and on top of that it was filmed in 1999, the last year of the old century.

Train Crazy is proud to bring you what we believe is the most detailed railway programme ever made on one stretch of line with over 140 action sequences from 30 locations.

This was the last chance to see the coast before the new trains arrived.......

It features all the film from the original week, completely re-edited with a new script, some unseen footage, plus:

Travel back in time to when real trains ruled the rails!

This is the ultimate programme for lovers of class 37 thrash and the wonderful North Wales Coast!