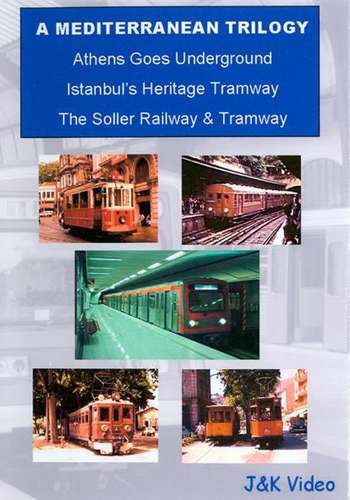 Three films on one DVD, as follows:Athens Goes Underground

In this programme, we see how the city's electric transport system has changed since 1984.

We start with the Athens - Piraeus Railway when much of the original wooden-bodied stock, dating from 1904, was still in service.

To cater for the 2004 Olympics, two new Metro lines were built, with European funding, and we see these in operation, together with modern stock on the Piraeus line.

In addition we see how the trolleybus fleet is being renewed.

This section captures the unique atmosphere of this city which links Europe with Asia.

A heritage tourist tramway was opened in 1990, using original metre-gauge trams which had been in storage since 1966 when the former tramways closed.

This line provides a useful link between Taksim Square and the Tunel Funicular, along the pedestrianised Istiklal Caddesi shopping street.

We ride the Tunel Funicular to see the modern tramway on the other side of the Golden Horn, across the Galata Bridge and also see the busy ferries plying the Bosphorus.

The Soller Railway and Tramway

On the attractive holiday island of Majorca, the Soller Electric Railway connects Palma with the mountain town of Soller.

The railway still operates with the original wooden-bodied motor cars, dating from electrification in 1929.

At Soller the train connects with the delightful tramway that makes the scenic journey to Puerto Soller.