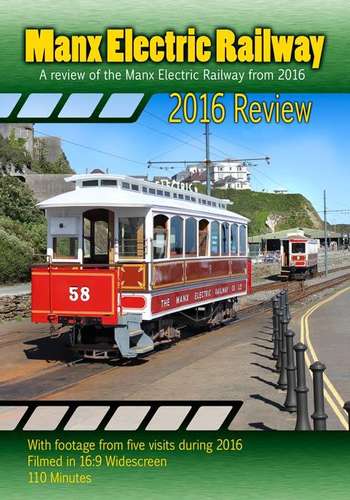 2016 was an interesting year for the Manx Electric Railway with the return of trailer 58 following overhaul, various repaints and periods of intensive service using the entire fleet. Visits from March, May, June, July and October make up this review.

From March: The first day of service with car 19 working the first journey of the year. Amazingly, car 2 is stabled at Laxey and runs in service! Filmed in gorgeous spring weather, with single line working between Groudle and Garwick.

From May: Tunnel cars in action alongside cars 1 and 2 on Ramsey service as part of timetable D. Trailer 43 in service with stunning night footage of 21 and 57 on evening service.

From June: Brilliant footage from the TT period which saw every available tram in service, plus a return for Trailer 58, filmed on its first run. Includes the 33+57 breakdown at Laxey with single line working and remarkable scenes at Ramsey with up to 5 car sets stabled in the station, including the rarely used third track.

From July: Footage from the Heritage Transport Festival with 16+58 to Groudle on a Private Hire; red and green combo 1+60 to Laxey; 16+Van 16 to Groudle; new illuminations for car 9; Car 2 and Tower Wagon 1 on a fund raising special to Dhoon Quarry in the Manx mist; footage of the Northern section of the line including panoramic shots of Mail Vans 4 and 16 on the Ramsey service and coverage from Sunday 31st July, of one of the best days on the MER in recent times with every serviceable motor in traffic.

From October: A visit during the last week of the season with timetable A in operation and all trams running single motor. Features cars 19 and 20, plus car 9 on a test run. 25 trams ran in service during 2016 - all of which are featured here.