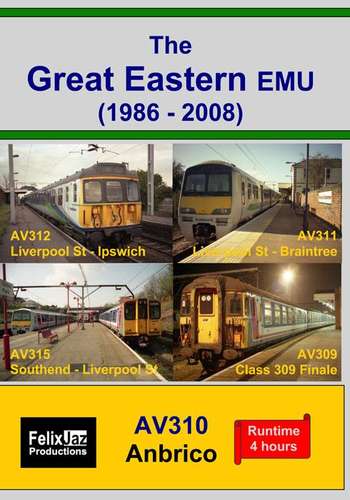 Section 1: Thursday 20th January 1994 We first join the early morning service from Harwich Town to Liverpool St. The 309s are seen passing through Ilford and Stratford. In the evening returning to Liverpool St we travel out to Ipswich. After a break the set then returns to Colchester.

Section 2: Friday 21st January (morning) This morning we start our journey at Clacton-on-Sea. At Thorpe-le-Soken we change trains to visit Walton-on-Naze. This becomes the next service to Liverpool St. All stations featured to Colchester.

Section 3: Friday 21st January (afternoon) Stepping back to 1990 we depart Liverpool St. Returning to 1994 and Clacton we see a number of Class 309 sets stabled mid afternoon.

Section 4: Friday 21st January (evening) The last evening arrives and photographs appear on the platform to watch the final services depart. We join the 18:22 service to Clacton. On arrival at Clacton we see crowds around the driver as the Greater Eastern period comes to a close.

Bonus Section: North West Finale 2000 We now travel to the Greater Manchester area and see the 309s back in action. Macclesfield, Crewe, Stockport and Cheadle Hulme feature. On the last day, Friday 26th May 2000, we see the final services departing Manchester Piccadilly with headboards.

Section 2: Romford - Shenfield
After Romford we see a Class 321 stopping at Gidea Park, Harold Wood and Brentwood and Shenfield.  Class 360s are also seen in action.

Section 3: Shenfield - Witham
After Shenfield the Class 321 stops at Ingatestone, Chelmsford, Hatfield Peverel and Witham. Again a number of Class 317s and 360s are seen.

Section 4: Witham - Braintree
We now join a Class 321 for the Braintree Branch. An up arrival and down departure are seen at both White Notley and Cressing. The (then new) station at Braintree Freeport sees an up and down service arrive and depart. At Braintree terminus a Class 312 is seen in the station before we join the 321.

Section 5: Witham - Colchester
At Witham we join a Class 360 to continue our journey. At Kelvedon the Class 321 is on both fast and stopping service while at Marks Tey Class 317, 321 and 360 services are seen. Finally, at Colchester, the Class 317 and Dutch livery 321 finish this film.

Section 1: Liverpool St - Colchester
We join a Class 312 and take a non-stop run to Shenfield, passing through most stations en route. After departing Shenfield we see a Class 312 stop at Ingatestone, Chelmsford, Hatfield Peverel, Witham, Kelvedon, Marks Tey and Colchester.

Section 2: Colchester Station
Many Class 321s and 360s are witnessed arriving and departing this busy station.

Section 3: Colchester - Clacton
Firstly to East Gate Junction crossing where a 312 and a 321 pass. Colchester Town is next, with a number of arrivals and departures. We continue on, stopping at Hythe, Wivenhoe, Alresford, Great Bentley and Weeley. At Thorpe-le-Soken down and up services connect. We see Clacton by night.

Section 4: Manningtree – Harwich Town
Travelling back in time to 1987 we join an eight-car Class 312 on the Harwich Branch. Returning to a more recent period we stop at Mistley, Wrabness, Harwich International and Dovercourt.  We see a Class 321 at Harwich Town by night. The eight-car then features on the return service to Manningtree.

Section 1: Southend Victoria - Wickford
Firstly we enter Southend Victoria station. After a quick look at stabled sets we join our Class 321 set. The service calls at Prittlewell, Rochford, Hockley, and Rayleigh before arriving at Wickford.

Section 2: Southminster - Shenfield
We join a Class 315 at Southminster and start our journey by calling at Burnham-on-Crouch and Althorne. After passing another 315 at Fambridge we continue to Woodham Ferrers and Battlebridge. Wickford and Billericay are on the Southend line.

Section 3: Shenfield - Romford
After watching a number of Class 315 movements at Shenfield we continue to Brentwood and Harold Wood. In 1994 Gidea Park was a busy station, being the terminating point for suburban services!

Section 4: Upminster – Seven Kings
We start this section at Upminster and then travel to Emerson Park and change trains at Romford.  Now to Chadwell Heath, Goodmayes and Seven Kings where numerous Class 315 sets are seen.