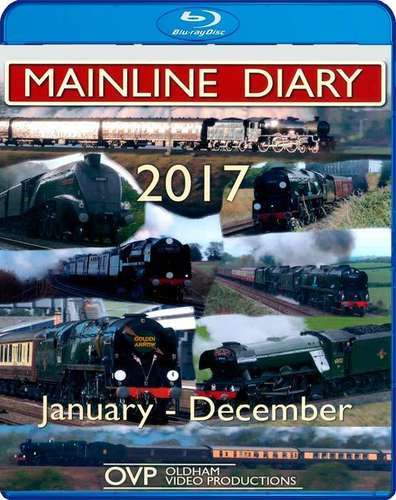 This 2017 video review features the very best of mainline steam across the UK once again. It features the reintroductions of some old favourites as they approach the end of their mainline careers. With plenty of variety and action, this programme will give you endless pleasure and enjoyment for many years to come! It has a brief commentary and on-screen locations. Content includes:

5043 EARL OF MOUNT EDGCUMBE – Returning to Cardiff for the first time since December 1963 (March 11th, 7 locations), in blistering form along the Welsh Marches route in beautiful spring weather (March 25th, 6 locations), working to Salisbury via the Southern, including some stunning shots leaving Tyseley and around Fenny Compton, (April 8th, 7 locations), running to Chester via the old Cambrian Coast route (Sept 25th, 6 locations), and working its annual Christmas Special to York (Dec 16th).

45699 GALATEA – Seen working between Gloucester & Bristol for the first time since steam days (March 21st, 3 locations), and seen powering up Llanvihangel Bank unassisted on the Great Britain X (May 5th).

60103 FLYING SCOTSMAN – working the Settle & Carlisle re-opening special (March 31st, 3 locations), on several specials around Bristol (May 23rd, 6 locations), and on a circular tour from the West Somerset Railway to Bath & Bristol via Westbury (May 26th, 6 locations).

46100 ROYAL SCOT – on a special to the West Somerset Railway (with 53808 working the branch line sections – April 20th, 6 locations), also working solo over the South Devon & Cornish Banks on the Royal Duchy (July 30th & August 6th, 10 locations) and through the Cotswolds, including the first Scot to run on the Derby to Bristol Mainline since steam days (October 28th, 6 locations).

35028 CLAN LINE – featured on the END OF SOUTHERN STEAM tours including the Bournemouth Belle recreation, exactly 50 years ago to the day since the last run, (July 5th, 5 locations), The Waterloo Sunset, (July 9th, 6 locations), Golden Arrow, (Sept 13th, 6 locations including Martin Mill Bank and Folkestone Warren), and the Atlantic Coast Express to Exeter (Sept 23rd, 15 locations including Honiton Bank). We also see the locomotive making its debut on the Torbay Express (August 20th, 6 locations, including high-speed chase sequence), with some superb running on all trains featured.

46233 DUCHESS OF SUTHERLAND & 60009 UNION OF SOUTH AFRICA going head to head against each other on specials through the Cotswolds and also on Sapperton Bank (August 17th & 26th).

34046 BRAUNTON still running in the guise as 34052 LORD DOWDING, working the Great Britain X railtour with 46100 ROYAL SCOT over the South Devon and Cornish Banks (May 6th & 7th, 11 locations), and also on the END OF SOUTHERN STEAM special to Weymouth (July 8th, 5 locations including Upwey Bank).

70013 OLIVER CROMWELL – Back on the mainline, featured on the Welsh Marches (November 25th, 2 locations), and also on the Sherborne Christmas Carol (December 14th, 2 locations).