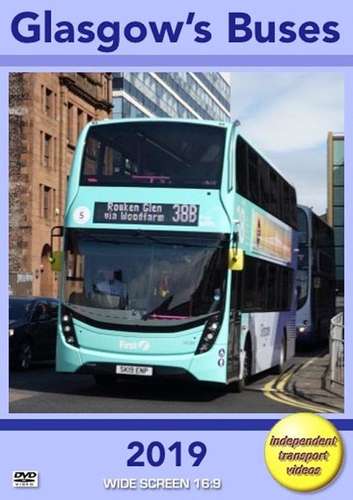 The Glasgow bus scene in 2019 is quite a colourful affair. The main operator, Firstbus, operating as First Glasgow, has introduced route branding across the city with brightly coloured fronts to indicate the routes the buses are operating on. First Glasgow introduced a fleet of 75 new buses at the end of 2018. These ADL Enviro 400 MMC double-deckers are in the new ‘simplified’ First corporate livery featuring coloured fronts and are seen in this DVD programme. Stagecoach also operate a number of inter-urban services in the Glasgow region in their corporate livery as well as a number of ‘route branded’ services. The Scottish Citylink livery of blue and yellow is seen on coaches operated by Parks of Hamilton and other contractors. Also featured in this programme are a number of buses operated by local independents including McGill’s, Stuarts and West Coast Motors (some branded as Glasgow Citybus).

Our filming takes place at many locations across the city. Our first is Killermont Street, home to the massive Buchanan Bus Station. Here we see buses from the variety of fleets arriving and leaving to all parts of the city and Scotland! Other locations featured are Bath Street, Cathedral Street, North Hanover Street and George Square. Our cameraman then captures the action of the buses running through the many streets of the city with backdrops of the superb architecture that can be found in central Glasgow including the ‘Merchant City’ area. This includes Ingram Street, High Street, Trongate, Saltmarket, Crown Street, Gorbals Street, Argyle Street and Renfield Street to name but a few. A further visit is made to Buchanan Bus Station. A brief visit is then taken to the Scottish Bus Museum at Lathalmond. During the 2019 Open Weekend, Firstbus sent four vehicles for display, that included from First Scotland East 67762 (SN62 AUJ), an Enviro300 single-decker branded for the X36 route from Stirling to Glasgow and sporting ‘Midland’ fleet names. First Glasgow displayed 33101 (SK19 EOM) a brand new ADL Enviro 400City double-decker in a two tone purple livery for the 500 Buchanan Bus Station to Glasgow Airport service and two Volvo B9TL/Wright Gemini double-deckers, 37738 (SF09 LDJ) and 37751 (SF09 LFB), both in liveries celebrating 125 years of buses in Glasgow (1894-2019). 37738 is painted in Glasgow Corporation livery and 37751 in the Greater Glasgow scheme of green, yellow and white.

We now open up our archives with some cine film taken by Malcolm King filmed at Buchanan Bus Station in the 1970s featuring Bristol Lodekkas and many Alexander ‘Y’ type single-deckers. Malcolm returned in the 1990s when the scene had changed considerably following deregulation with a variety of liveries and vehicle types. The bright orange and black liveried Strathclyde’s Buses really stand out with many of the former Scottish Bus Group buses wearing various livery styles and fleet names. We see Volvo Ailsa double-deckers, Volvo B10M Citybuses, Leyland Atlanteans, Olympians, MCW Metrobuses as well as many Alexander ‘Y’ type single-deckers. Locations include Buchanan Bus Station, Johnstone, Old Kilpatrick and Clydebank. So much for you enjoy!