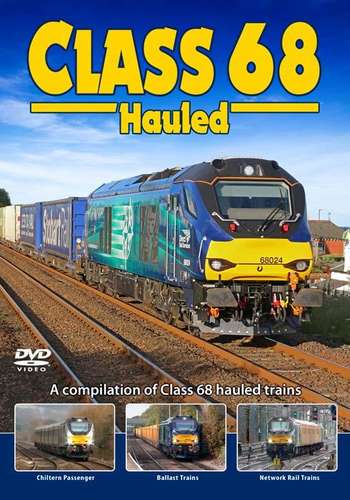 Introduced from 2014 and operated by DRS, the Class 68 is a new-breed of Bo-Bo diesel locomotive, designed for express passenger trains and heavy freight.

Officially known as UKLight, these powerful 3750hp locos, with their 16-cylinder Caterpillar engines have a top speed of 100mph and are based at Carlisle Kingmoor depot. So far, 25 are in service with more on order; six are leased to Chiltern for their express passenger work; two are painted in Scotrail livery for commuter trains and the remainder carry the smart DRS compass livery and are used for freight and other duties. 19 of them are named.

This special compilation DVD looks at these locos at work in 2014-2016. From container trains in Scotland to double heading on the Daventry - Mossend Tesco Express; Mountsorrel - Crewe ballast trains; and passenger trains out of Marylebone, Edinburgh and in East Anglia.

Presented in the format of minimal narration with on screen captions, this DVD showcases the Class 68s and the many trains they work, countrywide.