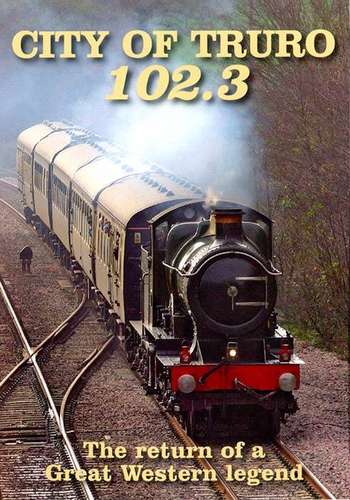 Inspired by City of Truro's triumphal return to steam to mark the centenary of the historic high speed Ocean Mails run from Plymouth to Bristol on 9th May 1904, this programme also celebrates the return of G.J. Churchward's legendary 4-4-0 to the West Country mainline after a break of 43 years.

The question, "Did City of Truro really achieve 100 mph?", is still contentious, so, as the railtours retraced past glories, the extensive lineside action is complemented by photographs and press extracts from 1904, notably by Charles Rous-Marten, the GWR choosing to embargo his claim that 102.3 mph was achieved down Whiteball Bank for fear that knowledge of such a speed would scare its passengers!

Footage includes the Gloucestershire-Warwickshire launch, main line tests, whilst comprehensive coverage of the 'Ocean Mails 100' weekend from Bristol to Kingswear and return includes the Centenary Day trips from Paignton.

Thereafter, the brief return 'home' for the NRM Railfest Bicentennial celebrations, trips to Scarborough, Birmingham, Stratford-upon-Avon and double-heading with Rood Ashton Hall to Didcot are all covered before the Edwardian 4-4-0 attacked the heavily graded Bodmin & Wenford Railway.

But perhaps the best was saved until last? Upon completion of re-doubling the Cornish mainline between Burngullow Junction and Truro, Network Rail employed City of Truro for a VIP train to Truro; the locomotive last steamed into it's 'spiritual home' in 1957!

Extensive coverage of the positioning runs between Birmingham and Plymouth includes the fastest ascent of Dainton by any steam locomotive in preservation, the long climb of 'Rattery' setting the scene for the day City of Truro steamed across Brunel's Royal Albert Bridge back into Cornwall.

More fierce gradients make for a noisy 'homecoming' whilst 'tracking' footage from the Network Rail helicopter shows the double-framer on the new double track section.

Scenes of two 'City of Truros' in their namesake's station precede the concluding West Country run, from Plymouth to Bristol, the best chance yet to relive the route of the 'up' Ocean Mails - stirring stuff!