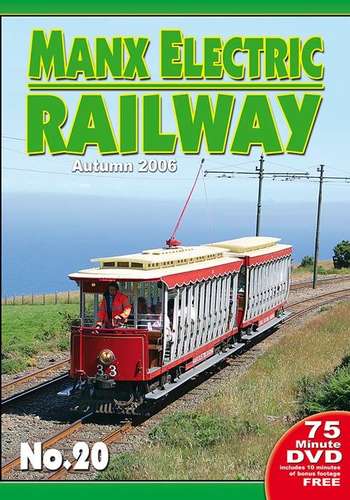 Video 20 features three fascinating and unforgettable days from the MER from the summer of 2006.

Enthusiasts day, Friday 21st July: Full coverage of this day starting with a parallel run from Douglas to Groudle with 100-year old cars 32+62 and 33+61. After running round at Groudle all four trams returned to Douglas and took their place on the Ramsey service. See footage of both sets on the northern section. On Friday evening, an intensive service operated between Douglas and Laxey featuring five different sets while 6+40, 21+43 and 32+62 all worked evening journeys to/from Ramsey. The evening ended with 33+61 working a 21.45 service from Laxey to Douglas. This 100-year old combination was chased back to Douglas and filmed at various locations at dusk - stunning footage.

Monday 24th July: This day started with a parallel run from Douglas toGroudle featuring cars 1+51 and 2. At Groudle, 1+51 continued to Ramsey. Due to superb weather, Open cars were unusually allocated to the Ramsey service including 2+49, 32+62 and 33+61. This was an amazing day for Open sets to Ramsey and one magical 67 minute sequence was filmed at Dreemskerry, featuring the best the MER has to offer.

Tuesday 25th July: Another fantastic day weatherise and two private hires dominated the news. Firstly, the IOM 30 Group took 32+57 for a photo charter. See this odd combination at various locations including a rare solo run by 32 from Laxey to Dhoon. In the evening the very first TLP tour ran and featured cars 26+57 on a buffet supper journey from Douglas to Dhoon Quarry and back. Things didn't go to plan after 57 derailed on the crossover at Dhoon! See actual film of 57 jumping the rails and coming to rest on the sleepers - amazing footage!