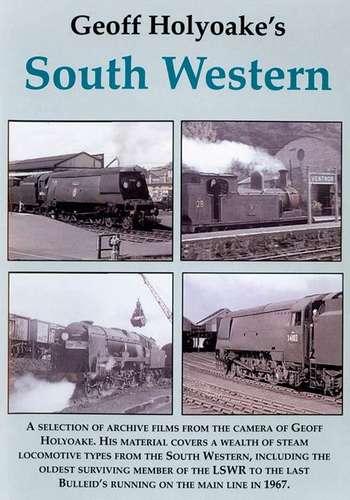 AVAILABLE TO PRE-ORDER, THIS TITLE IS DUE IN STOCK MID-JANUARY 2022.

A selection of archive films from the camera of Geoff Holyoake. His material covers a wealth of steam locomotive types from the South Western, including the oldest surviving member of the LSWR to the last Bulleid’s running on the Main Line in 1967.
For all of you who remember Waterloo as the start of wonderful holidays in Hampshire and Dorset – or as the start of yet another day’s work! – this dvd will bring back many memories of the last days of steam in the 1960s.

To the Southern enthusiast it brings back happy memories of Bulleids Nelsons, M7s, Arthurs, green coaches, Nine Elms, Eastleigh and branches. Geoff Holyoake filmed all these, and more, on 16mm colour film for his Meteor Films, which were sold in 8mm film form many years before video came on the scene.

Now Railscene has brought them to the small screen, with the addition of sound and commentary, to bring back the days of Southern Steam in the 1960s! Enjoy the dvd.

Clapham Junction:Traffic through and at ‘the busiest junction’, including empty stock workings, the Windsor line platforms and inter-regional freights, with an LMS 2-6-4T, a J52 tank and a Capriotti BR5 mixed in with more M7s, a Q1 on ‘the milk’ and the ‘Brighton Belle’ The Kenny Belle: passenger trains at Kensignton Olympia including two specials with rebuilt pacifics.

Steam Through the Suburbs: Wimbledon, with an original Bulleid, a 5 on the breakdown train and N15 30796, Raynes Park, with expresses passing, New Malden with more expresses, then 34100, 80145 and 77014 on the Chessington, Kingston and Windsor lines on a special, double headed original Bulleids at Feltham, 34051 on the Churchill Funeral Train, a Q and a U at Virginia Water.

South Western Main Line: Back at New Malden, 34100 on the Royal Train, 30788 on an up express, Farnborough with rebuilt Pacifics, Basingstoke with much action, including an ‘N’ on a freight, Grateley with a West Country, and Salisbury with five original Bulleids and a view from the train of the shed.

Southern Hampshire: Starting in Southampton Docks with 34079, then a tour with 120 and 30064 over the streets and up to Eastleigh, Station and sheds scenes with Pacifics being coaled, movements in the yard and then a visit to Eastleigh Works including scenes inside the workshops and outside in the yard, with a great variety of Southern motive power including classes V, Z, M7, LN, K, H16, BB, WC, Q, USA – many in the scrap lines. Finally, S15 and 30837 through the snow over the Mid-Hants.