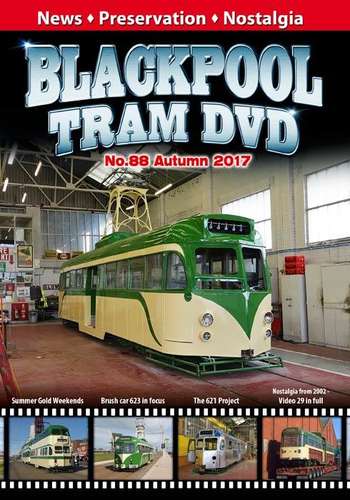 Summer 2017: Footage from the three summer Heritage tram Gold running days including the Starr Gate weekend from June and 715 on the RR depot shuttle; Tram Sunday weekend from July with 623 making its return to service and 737 making a rare appearance and the August Bank Holiday weekend with a part closed tramway and some unusual journeys plus 713 and 718 in service. The entire operational Heritage tram fleet are featured. (63 mins)

The 621 Project: The second report on this tram looks at its overhaul and repaint as it progressed during the summer. From the Fitting Shop and new panels, the tram is moved into the Paint Shop where a repaint into the post-war green and cream livery commences. (5 mins)

The Heritage Fleet - Inside and Out #5 - Car 623: Part five of the series exploring Blackpool's Heritage fleet features Brush car 623. The tram is filmed in detail inside and out looking at the cabs, saloons, bogies and destination blinds before a series of rides, including a special low-cam journey along Lord Street in Fleetwood. (24 mins)

Nostalgia: It's back to summer 2002 with Blackpool Tram Video 29 in full and on DVD for the very first time. Footage comes from the June - August period of 2002 and includes the return of Coronation 641, many new advert liveries from that year, Tram Sunday with 147, 5, 513, 66, 40 and 660, footage from the August Bank Holiday weekend and a detailed look at the old tramway from Talbot Square to Manchester Square. (60 mins)